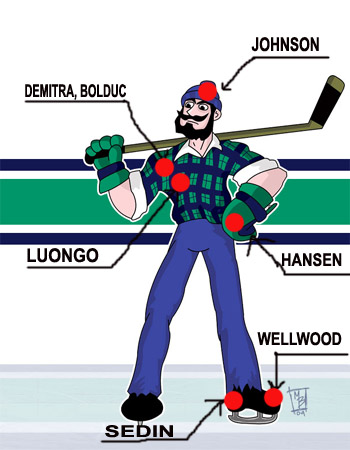 THE ENEMY: Mile High Hockey and Jerseys and Hockey Love and Jibblescribbits. The latter 2 blogs I have been in contact with since well before the SBN days. Good guys.

Update: 12:44 PM PST: There is a good chance that Kyle Wellwood will return tonight, according to the Vancouver Sun. He practiced on line 3 with Steve Bernier and Tanner Glass. The Sun also reports that Darcy Hordichuk will play on line 4 with Rick Rypien and Mario Bliznak. Apparently, the healthy scratches are Mathieu Schneider(?) and Shane O'Brien.

Daniel Sedin update! Finally! He had his cast removed and will be walking around in a walking boot for a week.

I’d have to say Britney Spears in 2001 was one of the concerts I really liked going to. Yes, it was great. The best band out there I’d like to say, I really like U2. -Burrows

Update: 11:33 PM PST: The glass is half full. Geez uh..thanks Detroit for beating the Flames 3-1. With 2 games in hand, the Flames are only 1 point ahead of Vancouver. The Canucks remain 1 point out of a playoff spot.

It's awfully hard to be optimistic about the Canucks' chances against the Western Conference's best team, led by the NHL's current best goalie. So much is going wrong for the Canucks and right for the Avalanche.

Colorado lost it's first game in regulation in over 3 weeks to the Sharks the last game they played. They were terribly outshot (46-25) but Craig Anderson played well enough to give them a chance. For that reason, Anderson will start his 15th straight game tonight.

As soon as he arrived in Florida in 2006, his stats have been consistently awesome, no matter how many games he played. He was always stuck behind a #1 goalie regardless. Not anymore. Take a look at his game-by-game stats from this season. Note:

-the Avalanche allow a horde of shots against in every game, but Anderson answers the bell.

-only twice has his save percentage dropped below .903

-the guy is a freak. How much longer can he continue at this torrid pace? Jibblescribbits weighs in on that issue, and it's hardly arguable, IMO.

The Avalanche have quite a balanced attack, with Wojtek Wolski being the standout with 8 goals 13 points in 14 games. Willie, go out there and take care of that guy.

They just suck at defence.

The Canucks were saying that they would continue their stifling defence that they showed in the 2-1 win over the Kings when they played the Ducks the next night. They started off on the right foot, even with 8 defencemen dressed, but completely crumpled in the final 55 minutes of that game. Blame the back-to-back fatigue factor and Ryan Kesler will say "bullshit". Even with injuries to so many key guys, the team wouldn't allow any excuses. Bottom line is it plays a fucking role in what we're seeing out there.

So what can we expect from out beaten up Canucks Sunday night? They are so full of surprises aren't they? It's enough to destroy your faith/liver. I say: expect the unexpected. That's my heart talking. My head says the Avs have the superior advantage to take this one.

The Canucks have to contain the Avalanche's speed. In their 3-0 loss to Colorado in game 2 of the season they didn't do that, and we were wondering where in the hell their defence collective brains went. They also need scoring from more guys. C'mon lines 1 and 2, step it up!

Got to get off to a good start this week, as the Canucks play 4 games in the next 6 nights against Colorado, Rangers, Minnesota and Dallas. The latter 2 games are back-to-back. Oh yippee!

I / we will provide all the updates during the day, as you know there are going to be a few shitload of those.

I'm a little torn on who should start in goal for the Canucks. Both goalies were hung out to dry against the Ducks, but I thought Cory Schneider looked more sharp than Raycroft did. Discuss.

(By the way, a big hat tip to Couch Coach, a member of the CDC Forums, who created the original Johnny Canuck image. You sir are a fine artist!)