Share All sharing options for: Henrik Sedin Trudges Forward Without His Brother

We should be hearing some news about Daniel Sedin's injury soon, as the cast was scheduled to be removed yesterday and more X-rays performed. In the meantime, Henrik is doing his best to put up numbers and squash that psychotic twins separation anxiety talk. Sometimes, it appears that he (at least visually) during games is not playing as well without his bro. Maybe it's mostly because we aren't seeing that dominating Sedin cycle right now, because as you can see below, he is still putting up the points. 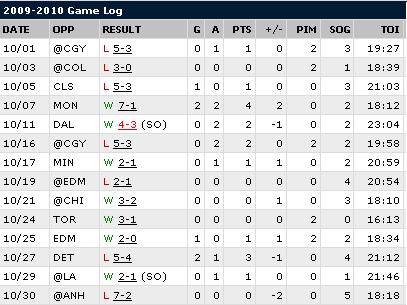 Daniel's last game was that October 7th romp over Montreal. He had 4 assists in 4 games. Henrik had 6 points in those 4 games. Since then, Henrik has 10 points in 10 games. Still on par for an 82-84 point season, which is normal for him.

Just throwing a nugget your way and giving Hank some praise (edit: minus that brutal giveaway on the PP last night that led to the SH goal). Now how about some secondary scoring?