Keep The Pedal to the Metal: Canucks-Red Wings Game Thread

Share All sharing options for: Keep The Pedal to the Metal: Canucks-Red Wings Game Thread

I really didn't think the Red Wings (3-4-2) would come out of the gate this slow. They sit 1 point above last place Nashville in their division and 12th place in the West, 4 points behind the Canucks. It's laughable, because who likes the Wings anyway? They are one of our mortal enemies in recent years. There are several other things about the Wings that surprised me since the summer:

-They lose Marian Hossa and Jiri Hudler and add Todd Bertuzzi and Jason Williams. That is not cool.

-That's just the forwards/D. Detroit's goaltending has not been up to snuff yet either. Both Chris Osgood and Jimmy Howard can do better. I've learned to never underestimate Osgood.

The bottom line is that this team will get it going. Once again, it's just a matter of when, and it had better not be tonight.

To the tune of Detroit Rock City by Kiss:

I get uptight on a Tuesday night

I've got Sportsnet no need for the radio

I know Luongo's gonna get us through

Sit down! And watch the Nucks kick the Red Wings' ass. 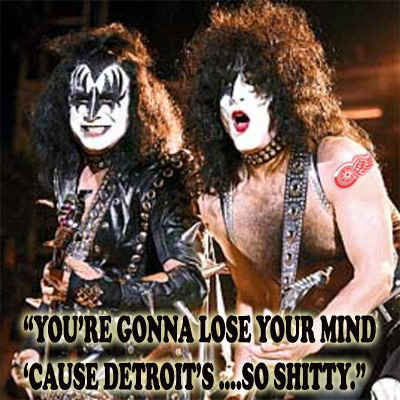