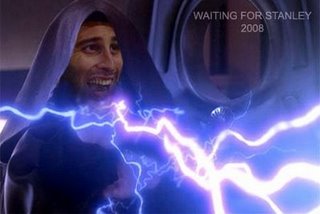 Even though the injuries are piling up for the Canucks, they are still finding ways to get it done. Vancouver played a much more intense and poised game against the Oilers than what we saw on Saturday against the Leafs. They are limiting the number of quality chances against and Roberto Luongo is back to his superstar self again, stopping all 27 shots faced.

The shutout moves Luongo into top spot on the Canucks' all-time shutout lead list with 21, passing Kirk McLean. Like I had said before, it has taken Lou just over 3 seasons to catch Captain Kirk, who got 20 shutouts in 11 seasons with the Canucks. Roberto has now allowed only 3 goals in his last 3 games and 6 goals in his last 5 games. I believe he only needs 6 more wins to pass Richard Brodeur for 2nd spot on the all-time Canucks goalie wins list.

As great as Luongo is, so is the team in front of him. I mentioned the team D limiting quality chances against, but how about guys like Ryan Kesler, Alexandre Bolduc and Ryan Johnson to name a few constantly lying in front of shots while killing penalties? The PK is a thing of beauty right now, and is slowly climbing the NHL ranks (13th). The power play is potent as well. The boys went 1 for 4 tonight thanks to Michael Grabner fancy little tip in game winner. The Canucks now rank 4th in the League in that category.

Speaking of Grabner...yeah we were correct about him needing to pot that first NHL goal. He looks more and more comfortable out there as every game goes by. He now has 5 points in 6 games. He has 25 shots total, which already ranks him 5th on the team. Pavol who? Keep up the great work, Grabner, and great work by that Speed Line. They now have a combined 5 goals, 3 assists and 34 shots in their last 3 games. Now wouldn't it be great if Sergei Shirokov goes the same route as Grabner?

The win puts the Canucks at 6-5-0, one point behind the Oilers and 3 points behind the Flames, who are second in the Division. The 12 points ties Vancouver with 3 teams at 8th spot in the Western Conference.

Is it just me, or did Willie Mitchell's destruction of Johnny Toews turn the tide for this team? The win over the Hawks was a big one.

Ah, I forgot to mention Mathieu Schneider. He scored no points or shots. Like he said pre-game, he wasn't going to do anything flashy right away.  After the game, he said it was a good game to come back in. The pressure on him is less when the team is winning. Whenever you hear Schneider talk you can really sense the leadership abilities he carries. He's wise and poised. That reflects on the ice as well.  After a couple games he's going to look great on that power play.