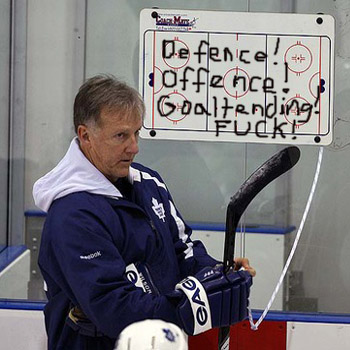 After a spirited win over the Blackhawks, the Canucks now return home to face the winless Leafs (0-6-1). This has got to be a sure-win, right? Well don't get too cocky. The Maple Leafs have had a full week, (thanks to that dumb scheduling) to think about being winless and I cannot see them as a guarantee to lay an egg in GM Place. The team itself has been staying positive throughout the week, and the coaching staff has not talked all that much to the media except to say that they have their fingers crossed that The Monster Jonas Gustavsson will play against the Canucks. Monster is nursing a groin injury, and Canucks fans know what that's like having lost Luongo to a groin injury last season. Toronto cannot rush this kid back.

Where to start with this hap-less Leafs team:

OFFENCE: They are not getting enough scoring, which was predicted by many before the season started. They rank 29th in goals for per game. A shocking stat (to me, anyways) is that Alexei Ponikarovsky is leading the team with 3 goals and 4 points in 7 games. He is also a +5. A miracle, considering. Jason Blake, who is expected to carry a lot of the load, has 1 goal and 2 points. Beyond Niklas Hagman (2 goals and 4 points) there are way too many forwards that aren't pulling their weight yet. many of them are younger players who are/were projected to do more. The arrival of Phil Kessel may inject something more down the road, but he's not supposed to be back for a while yet, not is it fair to say that he can repeat his offensive output from last year because of the caliber of players he was with in Boston. Hey, you never know.

DEFENCE: Brian Burke signed big named guys like Mike Komisarek and Francois Beauchemin this past summer in hopes of "rebuilding" the D corps. So far, that has not even come close to panning out. Beauchemin looks lost out there and Komisarek is taking a butt-load of penalties. The Leafs rank last in the NHL in goals against (try 4.57 goals against per game). My lord. That is atrocious. That is also a team stat.

Luke Schenn looks to watch this game from the press box. will play.

GOAL: Not much help from the goalies either. Vesa Toskala, who is also out with an injury, continues his less than stellar play. So if Gustavsson does not play against the Canucks, that leaves Joey MacDonald; he of the 0-2 record, with a .857 GAA and a 4.00 save percentage. I like our chances with him being in net). However, he knows what is at stake tonight. He wants to steal one for the team.

At some point, it is going to come together for the Leafs. It had better not be against the Canucks though. I just hope Vancouver doesn't play down to their level. We've seen it before. The Canucks gotta bury these guys early and often to finally get to .500 hockey. No use in taking their foot off the gas pedal.

Some Canucks news: Rick Rypien will not play against the Leafs. His groin still ails him.

-Canucks and Leafs hanging out together at Earl's? I'll let you be the judge of that story.

It is time for Kyle Wellwood to score. 1 assist in 9 games is bunk and he needs to get it going. What better time than against his old team (and fans who sadly keep butchering him about his weight)? Silence your critics, Woody!

Same with you, Mason Raymond. It looks all fancy when you zip up and down the ice, but we need some goals.