Share All sharing options for: Falling leaves and falling Leafs - Why the Canucks-Maple Leafs rivalry is my favourite

What better time for a tilt between the Vancouver Canucks and the Toronto Maple Leafs?

On Saturday the Canucks take on the Leafs, my favourite opposition team in the NHL. Why is Toronto my favourite opponent, you ask? Surely Calgary, Colorado and Chicago are bigger rivalries. And Washington, Detroit, Pittsburgh, and most other teams in the league are more exciting. Even amongst Canadian teams, Toronto has to be on the low end of rivalry/entertainment appeal for Vancouver fans.

However, the Maple Leafs have a particularly important place in my history of Canucks fandom. Apologies in advance if this post is overly me-centric-I hope that it gives you a sense of the importance that fan identity can have to an individual and the ways in which hockey can provide comfort and familiarity despite huge growth and change in other areas of life.

On Saturday night my living room, like countless ones throughout Toronto, will be filled with hockey fans tuning into Hockey Night in Canada. However, unlike many of those gatherings, this one will be considerably partisan and rivalry-fuelled. For, as a Canucks fan living in enemy territory, I love nothing more than getting together with a group of friends, most of whom are Leafs fans, and watching the Canucks dismantle Toronto. Throw in a couple other BC ex-pats and you've got yourself three hours of hockey-watching, trash-talking, beer-drinking mayhem.

My passion for the Canucks-Leafs rivalry runs deeper than this annual or (thanks to the recent schedule changes) biannual event. When I was about four years old I attended my first Canucks game, going to the Pacific Coliseum with my parents and two siblings (this was the only I ever went to with my entire family - in the late-80s you could actually pick up a Canucks ticket for $9.99 at Safeway, making it a not-unreasonable family outing). Unfortunately the game was a victory for the bad guys, with Alan Bester picking up the shutout and the Canucks rocking their worst-ever jerseys: the home yellow jersey with the skate logo. When my brother picked up Don Cherry's first Rock'Em Sock'Em Hockey video at the end of the year, I was devastated to see that the game had been immortalized in a number of Bester highlights that made the video package. I think most fans' first live NHL game is a formative experience, and mine was coloured blue and white by the opposition that evening.

I had a chance to renew my Leafs hate with a vengeance in 1994 when, in a geographically awkward twist of fate, Toronto and Vancouver met in the Western Conference Finals. The series had plenty of off-ice animosity, as a Vancouver and a Toronto journalist engaged in a vicious series of debates that ran in newspapers in both cities. The war of words had little to do with hockey and lots to do with uniformed stereotypes, but it fanned the flames of the on-ice rivalry just that little bit more-particularly when Rosie Dimanno called Vancouver "a blonde bimbo" of a city. The Canucks, of course, went on to win the series and face the Rangers in the Stanley Cup Final. The Leafs thus have the distinction of being a part of both one of the most iconic images and most beloved play-by-play calls in Canucks history.

In the summer of 1994 I visited Toronto for the first time on a three-day vacation with my parents. I distinctly remember proudly wearing my Canucks jersey all over the city. I am nearly certain that I wore it the whole time I was in the city. I wore it to the Hockey Hall of Fame (see picture, ignore purple shorts). I wore it to a nice restaurant at which the waiters wore tuxedos. I even wore it to church. I anticipated hostility and trash-talking from Torontonians, but received surprisingly little-perhaps because I was 10, or perhaps because I had the ultimate trump card based on the fact that the Canucks series Western Conference Final victory was just a few months in the rear-view window. 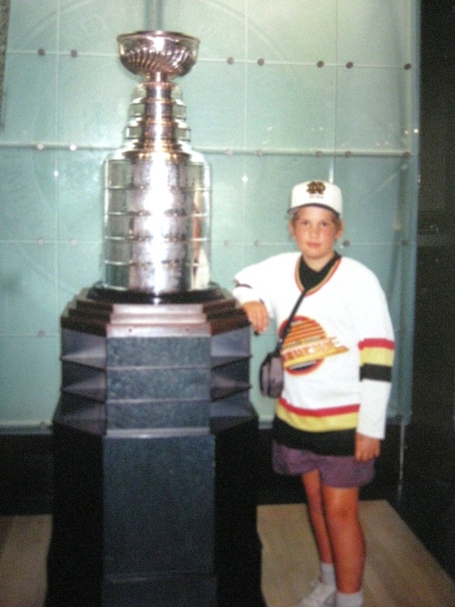 The real fun started when I moved to Toronto for university in 2001. Building upon my now-well-established enjoyment of the Canucks-Leafs rivalry, I took great pleasure in antagonizing Leafs fans and rallying behind the Canucks. Distance and isolation made me an even bigger fan, in part because I felt that I had to assert my Canucks fan-ness  (I still do, and am currently wearing  a Canucks hat as I write this on UofT campus) and in part because I had to work for it so much more. I had to stay up until 1 AM to listen to the end of the game online. I worked until about 1130 PM on Saturday nights, so if the Canucks were on Hockey Night In Canada I would tape the game, wait for it to be over, and then watch the game in its entirety. Media coverage of the Canucks was limited to nonexistent, so I prized every mention of the Canucks I could find in the Toronto Star. Sadly there was no Nucks Misconduct in which I could find an online Canucks community.

In many ways the Canucks were my way of maintaining a link to my home city, which I had permanently left. My parents and siblings moved different places, so I did not even have a family base in Vancouver. And so the Canucks became not just a comfort, but an expression of my identity and a way of maintaining my ties to the city that I called home, but in which I did not live. By defining myself in opposition to Toronto Maple Leafs fans, I also felt that I was asserting my difference from them, my Vancouver-ness. While the Canucks had been a huge part of my life for a decade-and-a-half, this was the time in my life when the team's importance to me was cemented even further and inextricably bound up in my sense of who I am as a person.

I do not mean to bad-mouth Toronto. It is a great hockey city, and some of my best friends are Leafs fans. I actually have a lot of sympathy for the Leafs, as I feel like their post-1967 history is very similar to that of the Canucks: long periods of hapless mediocrity punctuated by brief moments of glory and hope. If the Leafs ever win a Cup I would not begrudge it and I would celebrate the accomplishment (unlike, say, if the Flames won, in which case I would probably smash up my living room). However, when the Canucks play the Leafs, Toronto becomes the team I absolutely love to hate.

I started the tradition of Leafs-baiting in my first year of university. About a week before the Canucks played the Leafs I postered my residence building with anti-Leafs material, and urged people to come watch the game and cheer on their team. The unfortunate part about trash-talking about pro sports is that you have little to no ability to influence the outcome. I put my faith in the Canucks and, unfortunately they let me down that first game. But I had a blast bantering and drinking with other hockey fans, and a tradition was born. Even when I moved back to Vancouver for a year I still managed to rile up some of my friends through a blog that I started, and made "Leafs Bashing Week" a full week of mocking the Maple Leafs in the build-up to the Canucks-Leafs game. Fortunately my friends still talk to me.

So, as I anticipate the latest installment of my favourite NHL match-up, I am reminded of the huge role that the Maple Leafs have played in my growth as a Canucks fan and, as a result of the large place occupied by the 'Nucks in my life, as a person. Wherever you are watching this weekend, I hope that you will savour the game and know that, for a number of fans, a victory in this game is just a little sweeter than all the rest. If you've had a similar experience with other rivalries or just plain hate another team, feel free to share in the comments.

And, this Saturday in particular, GO CANUCKS GO!!!