Into The Pit: Canucks-Blackhawks Game Thread

Share All sharing options for: Into The Pit: Canucks-Blackhawks Game Thread 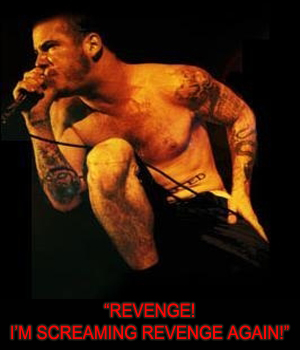 To me this is the first game of the regular season that I was really looking forward to seeing. So much hate here. So much anger still flowing through my veins from that treacherous loss in the playoffs. I still can't stand watching Patrick Kane skating around with that damned mouthguard hanging out of his yap. I wish somebody would make him swallow it.

Is this a must-win? Yes and no, leaning more towards a yes. I think the Canucks have to waltz into the United Center and play their best game of the early season for so many reasons. They still have not found a way to win on the road yet. Their defensive game looks better, but now are having trouble scoring. What better place to find their scoring touch than in Chicago?

The Hawks, as most predicted, are having goaltending issues after letting Nikolai Khabibulin walk during the summer. As Mike pointed out below, Cristobal Huet wasn't too hot in Chicago's last game, a 4-3 loss to Dallas on Saturday. Antti Niemi, who hasn't been all that significant this season either, will play against the Canucks. Niemi started the season with a shutout over the Panthers but has seen his number drop since. Despite that, he hasn't lost a game yet, as the Blackhawks have no problem filling the opposing net with pucks. This is where Roberto Luongo comes in.

This is a game where Roberto gets a chance to return to hell, look at the devil and spit in his face. I think this game could/can snap Lou out of his funk of mediocrity. I think this is mostly why I am so nervously excited about the whole damned thing. And it's not just Luongo that has demons to exorcise, it's most of the Canucks team that blew that series against the Hawks.

Many Canucks fans are damning the team to lose to the Hawks. I'm not one of them. While the Canucks will have to keep their emotions in check and play with discipline, they also have to show that fire that they remember what happened several months ago, and that this is payback, bitches! Now go in there and get some revenge, boys. And then let's move on.