When Are We Gonna Score?

Share All sharing options for: When Are We Gonna Score? 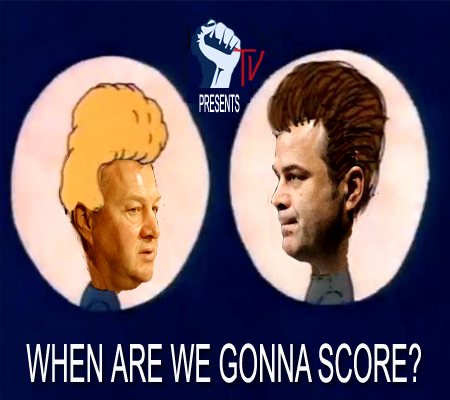 "I don't think that team worked that hard tonight," Ryan Kesler said of the Oilers. "And we got out-worked."

I don't know if that assessment by the Keslord is quite accurate. I thought the Canucks worked hard last night, but are having a tough time scoring. The loss of Daniel Sedin stings now doesn't it? Thinking Pavol Demitra would be a big help right now (god forbid)? Well I wouldn't blame you. As the Province put it today:

Whether the Canucks ran into a hot goalie in Nikolai Khabibulin or not, it's evident skill and goal-scoring are not their strong suits. Not with Pavol Demitra and Daniel Sedin sidelined, along with their 480 career goals. Without finesse, the Canucks, especially their remaining forwards — who have 512 career goals combined — need elbow grease.

Sure, Khabibulin was playing great last night, but there were numerous occasions where the Canucks could have buried their chances and didn't. The Samuelsson chance to stuff it in comes to mind. He put it right into Khabby's pads and not into the open net.

The Canucks seem to be finding identity one step at a time. Their defensive game is there now, which gives them a chance to win (and many of you a chance to go to sleep), but blaming their woes on "running into hot goalies" isn't going to cut it. If you look down the list of the Canucks scoring leaders there are too many players beyond Henrik Sedin, Mikael Samuelsson, Ryan Kesler, Christian Ehrhoff, Alex Burrows and even Willie Mitchell who are not contributing at the expected level.

Michael Grabner cannot find the back of the net yet. In my opinion, if he bags his first goal his confidence level will rise and he'll score more. He has major league skill but is leaving us scratching our heads right now.

Yeah, I'll finally bag on Roberto Luongo's performance now. Both Oilers goals against last night, Lou poked the puck past his teammates and onto an Oiler player's stick. A poll was put up during our chat with CBC today, and I think the results are fairly accurate:

Now, the team that is having a hard time putting the puck is about to face a Hawks team that has no problem doing that whatsoever. It's making me nervous. However, if the Canucks can turn it around against Chicago, I think they will have righted their ship.