Rypien vs Boogaard: Is It Going To Happen Tonight?

Share All sharing options for: Rypien vs Boogaard: Is It Going To Happen Tonight? 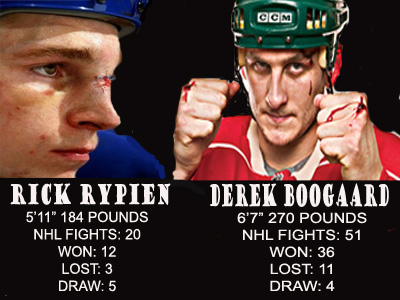 I hope you enjoy the fight card graphic. The info is all from that great site called Hockeyfights.com. Winners of fights were voted on by members, so the results are arguable.

This is a potential David vs Goliath battle that I have wanted to see for a long time. Is it going to happen? Boogaard the crazy dutchman played his first game of the season against the Oilers in the Wild's last game. He missed time with a concussion after reportedly taking the knob of a stick off his chin. I wonder if the concussion issue really bothers him all that much. He did not fight in his first game.

Rypien has the soul of a warrior and won't back down from anyone. His fight with Prust last night was one of few highlights of the game, if you are a Canucks fan. I don't see him backing down from the Boogeyman. Let's hope this tilt happens. If Rypien can pull off an upset he would make a bold statement as far as being the fighting champion of the NHL.

Love the boxing style that Rypper uses. So damned entertaining to watch.

The Game Thread is scheduled to be posted at 6:00 PM PST. Go Canucks! Turn the ship around, damn it!