Share All sharing options for: Canucks vs Flames Tonight...FINALLY 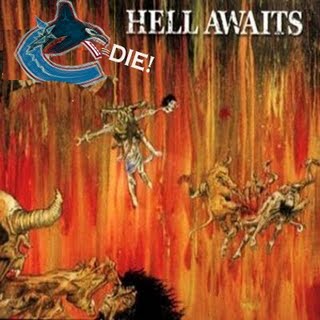 Fun fact: Two of Willie Mitchell's five fights since he's been a Canuck have been against Jarome Iginla.

As you know Vancouver is changing up their defensive units and, as noted before, the Flames are mixing up their offensive lines. If you're curious why the changes, the Calgary Sun suggests:

Take away the eight goals he scored in his first six games after being traded to the Flames last spring and Jokinen is now on a slide that has seen him score just three goals in his last 26 outings.

Not exactly the $5.5 million worth the Flames were hoping for when they traded for the four-time 30-goal scorer.

In the same stretch, Iginla has scored nine times in 26 outings, putting him at a pace that would see him score 28 in a year. Subpar.

I don't think there is much more to say about the Canucks after this long layoff except:

-I hope they don't play like slugs after 5 days off. I'd hate to see a them take a step backwards after the 4-3 win over Dallas. They were making positive strides up to that point. Damned schedule...

-All eyes will be on Michael Grabner, as he gets his big chance on line 1. Personally, I have a good feeling about what he's about to do. If I'm wrong... well he's on a short leash.

-Keep that power play going, boys! The Canucks rank 2nd in the NHL with the man advantage behind who? The Flames. Couldn't write that script any better. Unfortunately, the Flames are much better at killing penalties. They rank 14th in the League with an 81.8% efficiency, while the Canucks rank 27th at 66.7%. Yikes. Could be a difference-maker tonight.

So what have the Flames been up to lately? They are returning home after an 0-2 road trip from hell that saw them lose in 2 extremely opposite ways. They blew a 5-0 lead against Chicago a few days ago, allowing the Hawks to re-write their history. The next night they tightened up, got great goaltending from Miikka Kiprusoff but still lost 2-1 to Columbus. The Flames have lost 3 in a row.

Obviously coach Sutter is concerned so he is shuffling his lines for the game against Vancouver. If you have Curtis Glencross in your pool, you'll be glad to know that he has been promoted to the Flames' top line along with Craig Conroy to play with Jarome Iginla. The rest of the lines, according to the Flames' site are Dawes-Langkow-Bourque; Sjostrom-Jokinen-Nystrom; McGrattan-Boyd-Prust. The defensive pairings are Bouwmeester-Sarich; Regehr-Phaneuf; Pardy-Giordano and Kronwall-Johnson.

When will the Flames cease being inconsistent?

"Could take a day. Could take two weeks. Could take two months," said Brent Sutter. "Everyone likes to see goals and that kind of stuff but you look at any teams that have had success and they have buckled down defensively."

Can't argue with him there, but I hope it takes them the rest of the season to figure it out. Damned Flames. I hate them.

Who is leading the Calgary in scoring? Rene Bourque. This guy is a player on the rise. He has a hot hand right now. Meanwhile the Flames nation are waiting for Iginla to break out. He only has 2 goals and 4 points in 7 games. Olli Jokinen has 1 goal and 5 points in 7 games. It's just a matter of time before these 2 start putting up the points. Personally, I think Glencross is the guy to look out for tonight. I've been monitoring him for a couple years now, and he's like Mason Raymond on 'roids. He skates like the wind, plays a much more physical game plus he has a finishing touch. He's averaged about 15.5 minutes per game so far, but should excel in an increased role.