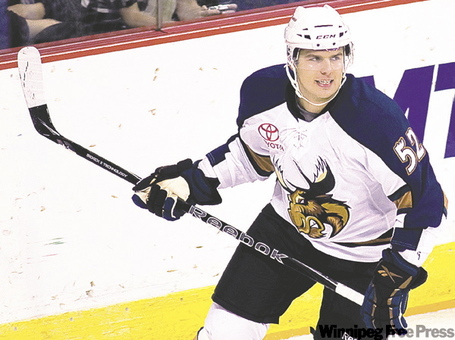 The Moose dropped a 4-2 game last night to the Abbotsford Heat with former Moose God Jason Jaffray scoring the winner. Cory Schneider played a weak game but, in his defense, he had a good number of newbies in front of him due to injures to Brian Salcido, Lawrence Nycholat and Alexandre Bolduc.

But, since we're on the Grabner/Shirokov/Desbiens watch for Friday, how did those three do? Well Desbiens finished even with a single assist. But the other two? I defer to an eyewitness:

It was actually the second-nicest goal of the night. The nicest one was scored by the Moose's European trio of Austrian Michael Grabner, Russian Sergei Shirokov and Slovak Mario Bliznak, who hooked up on a gorgeous tic-tac-toe second-period goal that made it look like the three had been playing together all their lives instead of a few fleeting moments at the end of a shift.

Shirokov slid the puck through traffic at the blueline to Grabner, who took the pass like the European soccer player he is, dribbling it from his back skate to his front skate to his stick in one fluid motion and then hitting Bliznak in stride, who promptly deked Heat goaltender Leland Irving and slid the puck to the back of the net.

That gives Grabner six points in five games, tying him for the team lead in points and the tenth best scorer in the AHL (and can someone explain why Grabner has an "X" next to his name which "indicates player not on active roster"?).

UPDATE: The mystery of the "X" has been revealed.  The Canucks have announced that they have recalled Michael Grabner from the Moose this morning. Grabner continues to impress at the AHL level, but now has a big chance to show us something with the big team. I didn't like his play in preseason, as he didn't find the scoresheet even though he has blazing speed and a wicked shot.

My question to you is: where should Grabner play? My opinion is that Alain Vigneault should leave Line 2 with Samuelsson-Kesler-Raymond intact because it's showing some promise. I wouldn't say Steve Bernier was a huge success on line 1 last game against Dallas, but I'd give him another shot. I think that Grabner could start on Line 3 with Wellwood and Glass and then possibly work his way up higher if he impresses or the Canucks start stinking it up and AV juggles his lines.