Mike Gillis' patience is running out

Share All sharing options for: Mike Gillis' patience is running out 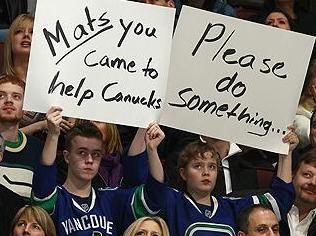 Does that picture break your heart or what? Sundin will get it going, mark my words. Unfortunately he doesn't seem to be able to lift the team out it's funk, and is being part of the problem. The references to Mark Messier are alive and well now, but I'm not biting. When the team does get rolling again, Sundin will play a positive role in it. I do believe that.
On to Mike Gillis...
Kudos to a poster at the CDC Forums for finding this Globe and Mail article that was circulating before the loss to the Wild yesterday, where Mike Gillis stated:

"Your patience level is obviously determined by how you're playing," Gillis said. "My patience is at an end with the way this group has performed."

The article leaves the possibilities open as to what Gillis may do to shake things up. Most fans want Alain Vigneault's head on a stick outside of GM Place on Pacific Drive, but I am not one of them. I think Gillis is standing by his coach, and I think the players are too, minus Demitra.
I believe a trade is in order, and it could happen sooner rather than later.
I've heard many people say that the Sedins should be traded, as they become free agents in the summer and a deal has not yet been reached with them. I say it is going to be difficult to move both of them at the same time. Hell it's going to be difficult to sign them both at the same time. But the brothers really aren't that bad. Sure they can make you want to stab your eyes out with a pencil sometimes the way they cycle and get no results. But then you look at their stats and they are the most consistent Canucks on the team. I would not trade them at all at this point. No way.
Alex Burrows' name has been brought up in the article as he too becomes a free agent this summer. But I wouldn't part with a guy like that. I think he should remain as part of the core of the team for so many obvious reasons.
Guys like Pyatt, Bernier and even Demitra should be the ones on the block, in my opinion. Demitra is a cancer I think. Pyatt and Bernier have not turned out like we had hoped as far as offensive production goes. Maybe Raymond and O'Brien are expendible too. You know that Vigneault and Gillis are in close conversation with who is or isn't working out on the ice and in the locker room. They have been preaching 'character' all year.
We'll see what happens. We know there are some sellers out there already (Leafs, for example). That's why I was almost joking around earlier in the week that maybe Gillis and Burke were talking, as Burke said he was finally getting some serious offers recently. Hey, you never know.
Trade talk is trade talk. I just hope this current squad pulls out of the funk, more importantly.

Detroit has lost 5 straight.
Montreal has lost 5 of their last 6 games.