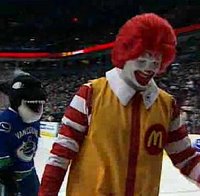 -Mats Sundin is participating. But he's dressed up as Ronald McDonald. Suddenly I feel hungry.

-A mini game between team blue and white saw Kyle Wellwood score the only goal for team blue. It was a roofer on Luongo. Team white had to do 20 pushups in the loss, according to Dan Murphy. Bieksa handled the pushups all on his own. His teammates just watched him.

Overall Team White had the best scores with the kids, the Canucks, and the best average score to pick up 3 points.
Overall score now is 3-3.

HARDEST SHOT (Puck has to go into net to count) 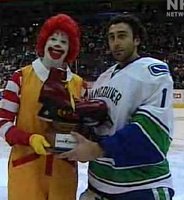 Team Blue Round 3
Salo: scores 1
Burrows: scores 1
Wellwood: puts on a show and scores 1. First attempt was a through the legs attempt