Trying to stay positive about the Canucks (5 stages)

Share All sharing options for: Trying to stay positive about the Canucks (5 stages) 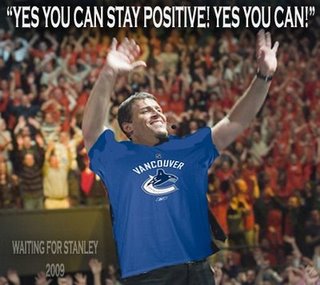 I had a great sleep last night and have completely calmed down after the disheartening 6-4 loss to the Blues last night, and I have come to the following conclusions:

1. Sundin is going to be taking a lot of heat in this city and world-wide not only until he gets his game back, but also when the team wins at a more consistent level. It looks as though it's going to take him several games to compete at that level. Patience is required here. He was mostly to blame for 2 of the Blues' goals because of a lousy line change and an unfortunate slashing penalty. Had the Blues defenders' stick not broken, Sundin was playing at a level where he could have either scored or set up the winner. A bad break indeed.
But let's not put too much heat on him. Yes, he is making the big bucks, but it's too early to judge, plain and simple. I saw a TEAM that let each other down last night.

2. I see a Pavol Demitra who is getting paid $4 million, has played with us almost the whole season, and is not achieving results expected of him.

Those are just hard data stats. But they do paint a picture. They tell us that the Canucks are not a great team...but a good team. And we can see that portrayed on the ice. Do you feel comfortable when this squad has a lead? I don't. A big part of that is because of Luongo's absence. But an even bigger part of it is that the team just cannot shut the opposing teams down like it used to. Remember when Alain Vigneault won the Jack Adams Trophy? Well that was labelled as "boring" hockey by many, but at least it was effective. This team is starting to resemble the Marc Crawford version of years past. It's too wide open for me. They need to tighten up.
Other nights they need to shoot or score more. Where is the identity?

4. Yet all is not lost. The positive here is that the Canucks still hold onto 5th spot in the West, and are still 6 points up on 8th place Minnesota. Vancouver is 4-4-2 in their last 10 games. Now take a look at the records of the teams below them in the standings. 8 of the 10 teams are playing near the 500 mark as we are (minus Dallas and Colorado).

5. The Canucks are 10-10-3 without Roberto Luongo. When Louie injured himself I stated that the Canucks would need to play 500 hockey in his absence to survive. That they are doing so far. And they are surviving.

If you want to see a great Canucks team, you are going to have to be patient. Just wait until Sundin hits his stride and Luongo returns before passing on too much judgement. That's what I'm learning to do. I just hate being patient. It doesn't come naturally for me.