Share All sharing options for: Sundin ready, now can the Canucks stop the red hot Oilers? 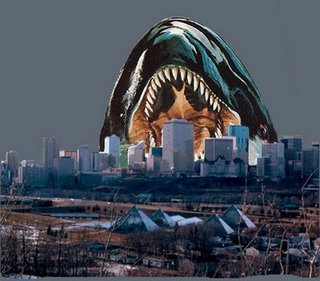 "It’s great he’s finally here," said Pavol Demitra. "It’s a huge game. Edmonton is playing great right now so if Mats can help us, it will obviously give us a little more jump. I think he came at the right time and definitely he came to the right place."

Link to the story at Vancouver Sun.
The right time, in a sense yes. The Canucks have lost the last 2 games in a shootout. Sundin should be a difference-maker there. But bottom line is that this team needs to focus and not rely heavily on Sundin to be Jesus. Everybody pulls their weight. If they do, then I think the Coilers are meat tonight.

As for why Hansen was sent down, AV said:

"Jannik for the last seven or eight games, we felt that his play had slipped a little bit," said Vigneault. "Obviously we talked to him about it and when push came to shove, these last few games here we thought Jaffray and Bolduc were a little bit better."


More of a game preview later.

- Ryan Johnson is about a week away from returning. Hos broken foot is healed, but his finger injury is still hampering him. Can't wait for him to come back.


"We talked about a reasonable amount of ice time to get him going. I think he’s fine with it. He told me at the end of practice that he’s good mentally and physically." - Canucks head coach Alain Vigneault on easing Mats Sundin into the lineup. (Vancouver Sun)

With Sundin playing with Wellwood and Raymond, I would assume that he will be eased into action 5 on 5. But when a power play occurs, I'm sure he will get a lot of ice time, preferrably with the Sedins. It could be a complete Swede PP line with Sundin, Sedins, Ohlund and Edler. Impressive.

-It may seem like the Canucks are somewhat stinky lately, and they are in the fact that they lost to Atlanta. However, in the past 3 games they have earned 4 of a possible 6 points.

- The Oilers are going to come out hard tonight. If they win, they take the 8th spot in the West, held by the Coyotes. That would also put them 4 points behind Vancouver. Yes, it really is getting that close.

Vancouver Canucks are pleased to announce that goaltender and captain Roberto Luongo has been named to the Western Conference All-Star Team for the 2009 NHL All-Star Game in Montreal, Quebec, on January 25th. Luongo will represent the Vancouver Canucks for the annual event.

How can anyone read that without calling bullshit? The guy hasn't played since November 22. Stupid popularity contest.

This is a big day in Canucks history with Sundin playing here for the first time. Come hang out at Canucks.com's live blog of the event.