Sundin could play Wednesday against Oilers / Schneider sent down

Share All sharing options for: Sundin could play Wednesday against Oilers / Schneider sent down 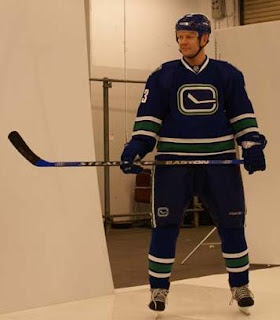 Tom Larscheid just said that AV is gonna run with

Just listening to him on team 1040 , Thats gonna be the Lineup Against Edmonton.

Mats Sundin will travel to Edmonton with the Vancouver Canucks on Tuesday, but won’t decide until after Wednesday morning’s game-day skate whether he will play that night against the Oilers.


"We talked about it today and it looks like I am going to go either way," Sundin said.

"I don’t know," he said. "I think after another practice tomorrow we’ll see. It felt good today skating. It’s how you feel tomorrow morning and how you feel maybe Wednesday morning and see how the body reacts when you skate at this pace. We’ll see."

So don't bank on him playing in Edmonton just yet.
Mats practiced on a line with Wellwood and Raymond today.
What he said about Wellwood:

"Kyle is a very smart player as you guys have seen here," Sundin said. "To me, he has got that hockey sense that comes natural to him. He understands the game, he understands where players are on the ice around him and understands where to go to get goals and assists and so forth."


What he said about Raymond:

"He was flying out there today. I really enjoy his energy and his skating. He made some great plays out there. It was nice to have some young fresh legs out there, too."

Demitra missed practice with a sore groin but will play against the Oilers.
From the same Sun article: Cory Schneider was sent back down to the Moose today. It looks as though Curtis Sanford is back. That being said, Jason Labarbera will start in his 4th straight game against the Oilers Wednesday. Good to see Alain Vigneault stick with the hot goalie.