Salo and Pyatt practicing and could return this week as well

Share All sharing options for: Salo and Pyatt practicing and could return this week as well 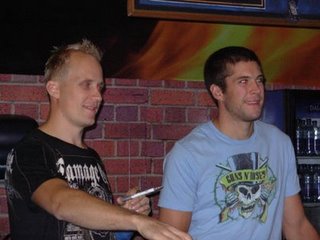 "It's sore still but at least I can do pretty much everything out there so that's obviously a good thing," Salo noted following the Luongo-based workout. "We haven't talked about any date to play. We'll just go by how it feels. You have to make sure it's healed because it's in a fairly difficult spot."

Pyatt said he experienced no pain skating. Sunday was his second day back on ice.

"My foot actually feels better in my skate than it does walking around in my shoe," Pyatt explained. "The swelling has gone down and I'm going to get an X-ray (Monday) to make sure the bone is healing properly. I'm hoping to play this week."

More on that story at the National Post.
Salo's return could be a blessing in the sense that Alex Edler is receiving nothing but bad reviews from the press and fans alike. He looks insecure and unsure out there. Salo will eat up a lot of Edler's minutes. Pyatt's return, and it's hard to say this because I wasn't impressed with him prior to his injury-except his defensive play, may be a blessing as well. He has 4 goals and 10 points in 36 games this season.
With the addition of Sundin and now Pyatt's return, somebody's getting sent down.
That odd man out could be Jannik Hansen, again.
This may sound crazy, but I wouldn't mind seeing Bernier and Pyatt play with Sundin. 3 tough guys on one line. The way Sundin is progressing, he may be able to get some offence out of those 2 floundering forwards 5 on 5.