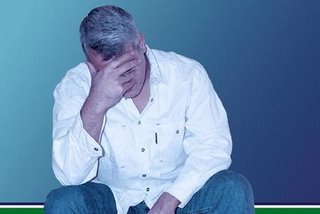 "My heart can't take it any more. I've been a Canucks fan for over 30 years. Every year we are fooled into believing this will be THE year or at least this year will be a better year.

"I fall for the hype every time, but after last night's game ... something died in me.

"I've never felt that disappointed by a loss in my life. I was so upset, in fact, that it carried over to my relationship with my wife. I snapped at her over the dumbest of things. She was an innocent bystander and not a hockey fan. That anger that was wrongly aimed at my wonderful wife was an anger so powerful I couldn't contain it. An anger expressed because of my emotional tie to a stupid sports team.

"I will never let that happen again.

"I proved to myself that watching, cheering and supporting the Canucks has finally come to an end. Period.

"The time I wasted watching the Canucks games I will now spend with my wife and daughter."

While I can appreciate Richard's passion for the Canucks over the years, I just have 3 questions:

1. Is that Richard Brodeur? Haha.
2. Isn't it a little early to be hopping of the wagon this season?
3. Has anyone seen my gun? I want to take this guy out behind the barn and put him out of his misery.

I swear, this is what an All Star break after a losing streak does to some people. They have too much time to think. Have a stiff drink and suck it up already. I think sometimes that the stupid #7 banner should be taken down from the rafters at GM Place.

Read more on Richard's little boo-fucking-hoo story here. There is plenty of reactions from the fans as well. Most agree with Richard, for the most part.

Once the Canucks get rolling again, Ricky will jump back on the wagon I'm sure.