Share All sharing options for: Canucks R&R (some in Hawaii) / Players being suspended for skipping All Star Game 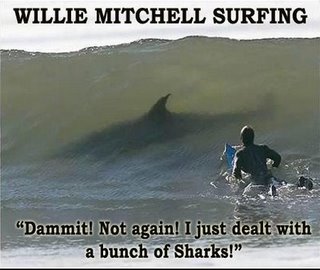 Last year Willie Mitchell and his wife went to Maui with nothing more than swimming and sun tanning on the agenda. That plan lasted about a day with Mitchell getting caught in a few waves.


"I surfed quite a bit last year," said Mitchell. "I really enjoyed it and I’m addictive with things like that so we decided to go again this year."

Mitchell and his wife will be far from alone this time around; his unwavering love for Maui perked the ears of a few teammates who are also making the trip this year.

Among them are Kyle Wellwood, Mattias Ohlund, Daniel and Henrik Sedin, Steve Bernier and Shane O’Brien.

Everyone is psyched to get away for a few days and recharge for the task ahead, especially Bernier, having always wanted to visit Hawaii.

"Usually I don’t like to travel much because we travel a lot all year, but I think it’ll be good to just relax and think about something else," said Bernier, who admitted he’s tempted, but a little scared, to hang ten with Mitchell.

Hell, the whole team minus Sundin (working out in Vancouver), Raymond and Luongo (All Star participants) should go to Hawaii. It would be good for chemistry.
CDC raises a very appropriate question however.

The Canucks have lost six straight games and eight of their past nine with only a pair of wins in 2009, leaving some to argue that the team has been on an early vacation. Do they deserve more time off? Or would they be better served by immediately building on Tuesday's OT loss in San Jose?

Do they deserve more time off? No. I'd say yes if I was a nice guy. It would have been great for them to build on the effort against San Jose but may lose momentum taking a week off. At the same time, clearing their minds may help.
The other part of this issue is that when they return to action on the 28th, it's back at home against Nashville. It's too bad the road trip didn't go a little longer so that they could stay away from the slaughterhouse that can be GM Place in recent weeks.

The NHL says it will enforce an understanding that all players who decline to show after being named to the All-Star teams must miss at least one game before or one game after the All-Star weekend.

NHL vice-president Colin Campbell said that the league pushed for the rule because too many players were skipping the game without good reason.

''We've all got obligations to the fans, the rights holders - this game is being televised around the world,'' Campbell said.

I'm a little torn on the matter. I do understand the NHL's position on it but...