Not the Sundin show, but the Bernier show

Share All sharing options for: Not the Sundin show, but the Bernier show 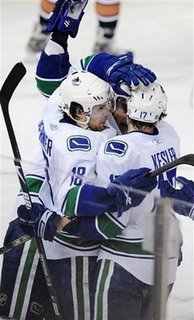 No, Sundin did not get a 5 point night in his debut. He was hardly even a factor. 15 minutes of ice time over 24 shifts, zero goals, no assists, no shots on net, one hit and 9-for-18 on faceoffs. But it didn't matter because it's almost as if Sundin was a decoy in tonight's game, as a couple of slumping Canucks revived themselves. In only 13:13 of icetime (hint at the irony), Steve Bernier scored 2 goals and added an assist in the Canucks' convincing 4-2 victory over the Oilers. Alex Burrows had 1 goal and 2 assists while Ryan Kesler tallied 2 assists. Yes, the Canucks got scoring from unlikely sources tonight. The best part was that they out played the Oilers in the 3rd period while being up 3-1, showing the killer instict that has been lacking in recent games.
To top it off, Demitra didn't just score into the empty net to bury the game...nah he took a slap shot to make it look even more convincing.
This was a great start for the brief Sundin era in Vancouver. The team didn't look distracted at all. Sundin was used sparingly, and the rest of the guys stepped up. Who could ask for anything more than a convincing win?
Jason Labarbera was solid but didn't have to be great. That is Canucks hockey under Alain Vigneault. This is partially why we needed Sundin in the first place: 3 lines that can do damage. Depth.
And to think that Luongo isn't even playing yet.

- Apparently, there were Canucks fans pissing off Craig MacTavish behind the Oilers' bench. I missed that part.

- What are Labarbera's stats as a Canuck? Well before the game they were sickeningly good. If IHDB updated them after tonight they should look like this.

- Oilers fans boo'ed Sundin every time he touched the puck. But he "didn't hear them."