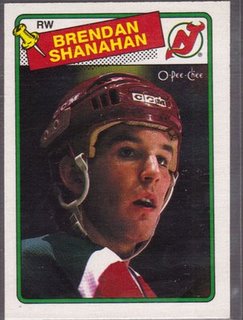 First Brian Rolston and Bobby Holik in the summer. Now Brendan Shanahan will finish his career with the club he started with.

"Brendan Shanahan has agreed in principle to join the New Jersey Devils," general manager Lou Lamoriello said in a statement. "He will begin skating on his own. Brendan will join the team at a date to be determined."

Well at least the Canucks are not the only team with a rusty free agent joining their lineup mid season. Nice move by the Devils. They are already playing superb even without Martin Brodeur in net.

Way back Shanahan was traded to the Blues by the Devils for Scott Stevens. That trade had a story behind it. From Wiki:

On 25 July 1991, the St. Louis Blues signed Shanahan to a contract. According to the collective bargaining agreement, he was a restricted free-agent, and therefore, the Devils were due compensation. Ordinarily, this compensation would be in the form of draft picks, but the Blues already owed four first-round draft picks to the Washington Capitals for signing Scott Stevens the previous year. The Blues made an offer for compensation that was made up of Curtis Joseph, Rod Brind'Amour and two draft picks even further down the road. The Devils wanted Scott Stevens. An arbitrator eventually decided that Stevens was to be the compensation, and so Brendan Shanahan joined the Blues in exchange for Scott Stevens.