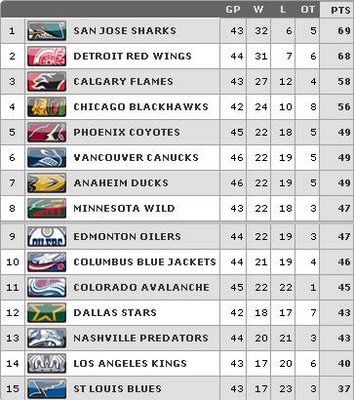 Matt Cooke's 2 goals to help the Penguins beat the Ducks tonight actually did us a favor. It launched us one point up in the standings because the Ducks have now played the same amount of games as Vancouver but have scored less. Thanks Cooke!
-The Devils beat the Blue Jackets to keep Columbus 3 points behind us.
-Now watch out for those Oilers, who beat Colorado tonight to move 2 points behind us with 2 games in hand.

The Canucks aren't the only team currently holding a playoff spot that have struggled during the season.

-The Capitals lost 5 games of 7 in late November.
-The Penguins lost 9 of 14 games in all of December and have lost 6 of 9 in January. That's a lot of losses there.
-The Flyers lost 6 games in a row at the very beginning of the season, and look at them now.
-The Atlantic Division-leading Rangers lost 6 of 12 games in December.
-From October 24 to November 14 the Devils lost 8 of 10 games. They would then go on to win 9 of their next 10.
-The great Canadiens lost 8 of 14 games in the month of November, and Koivu was criticized for not speaking French. Oh mon Dieu. They would rebound and win 8 of 13 in December.
-The Blackhawks have lost 5 of their last 9.
-The Flames may be hauling ass right now, but they lost 4 of their first 5 games in October, 5 of 8 in early November, and 5 of 9 in early December.
-The big and bad Bruins lost 6 of 11 in October.
-The Ducks lost 5 of 6 games to start their season, 5 of 6 in mid November (all home games), and 8 of 13 in December.

Feel any better yet Canucks fans? It makes me feel more confident. At least the Canucks are stinking it up now and not in March (yet). There is plenty of time left for this team to turn it around, even if it means we start winning a slew of games when we are in 10th spot in the West. I believe it will happen. I believe in this team. One way or another it will start rolling again. Sundin needs a bit more time. So does Luongo. A lot has happened to this bunch in the past few weeks with the aforementioned players, the backup goaltender situations in Luongo's absense, Sanford's exit, a dismal powerplay, etc. Like someone here said earlier, "this too shall pass." I mean, look at all the shit Frodo and Sam had to go through just to get the damned ring into the fire at Mount Doom.... haha.
Convinced? Still not happy? Try this: