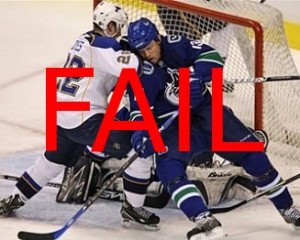 I'm sorry, I just can't resist the urge to yank a line from Cam Cole this morning:


That accurately describes Mats Sundin, the $7 million dollar man who damn well better have some more productive evenings in the next three months of his Vancouver mercenary stint then he did last night.

I suppose I could be nice and give the old guy a pass, just two games into his NHL season. But - um hmm - I won't. I'm an impatient blogger who has watched his team lose to bottom dwelling Blues and Thrashers while tonight getting to take on the Sharks (who we play twice in the next ten days). Meanwhile the Flames are pulling away with the NW lead and the West overall has become a ten car pile up. Sure this has less to do with Sundin and more to do with the team overall, but Sundin made himself the center story last night so he gets the bulk of my semi-literate rant.

First he was barely noticeable for most of the game again (save for the cheers he got when he made it to the ice). And honestly if it was just another night of him shaking the rust off that would have been fine. Not a peep from me. I'm willing to give him several more games before we see him be remotely relevant.

But his decision to take a slashing call a mere "200 feet away from his own net" in the final minutes of a tied game is unforgivable, particularly with his resume. If it was ANYONE else it would almost make sense (O'Brien I'm looking at you), but not him.

Maybe the sting of watching his team lose because of his penalty while sitting in the box will weigh on him a bit. Perhaps he'll come to the rink tonight determined to play his best against the best. Perhaps.

It was a collective team effort that put this game in the shitter. Personally my favorite dumbass moment wasn't even Sundin's; it was Nycholat who confused himself as a top four defensemen and fired a pass straight down the middle of the ice while deep in his own end, damn near onto the stick of a Blues forward, a sequence which lead to their first goal.

And how does this quote from your team's head coach possibly make you feel?


Yeah. Between work ethic issues, waiting for Sundin to be relevant and Luongo still healing, expect more games like this.

And if last night was any indication, a forfeit would be more fun to watch tonight than another night of pure destruction.