Luongo ready for full-on practices and could return this week

Share All sharing options for: Luongo ready for full-on practices and could return this week 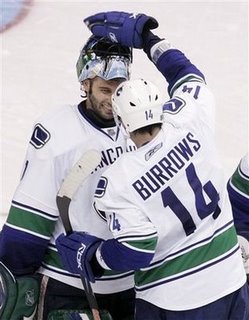 Vancouver Canuck superstar goalie Roberto Luongo will partake in a full team practice on Monday and appears set to return to game action this week.

Seven players took shots on Luongo in a variety of drills designed specifically to test his injured groin.

"I pounded it pretty hard and the groin is feeling fine," said Luongo. "We pretty much explored everything today. There were some broken plays where you kind of had to react and kick your leg out and be in a bit of a vulnerable position and I didn’t have any problems. So that’s really encouraging. I’m really happy with the way things went."

This is the most excited I've heard Louie sound since his injury. His return will be an enormous welcome to a team that just cannot play consistently. His presence as team captain will be felt in all areas, but especially between the pipes. It's amazing how well a team can perform in front of a goalie they trust. I think the Canucks have found that in Luongo's absense mostly with Jason Labarbera in net.
Luongo's return will force a decision to be made by management on who his backup will be: Barbie or Sandman. I'd say Labarbera at this point. It appears that Sanford may have blown his chances against the Sharks, as he played sub par and could not shut San Jose down.
I guess it's fair to say that we could see Luongo back by Thursday against the Coyotes or Sunday against the Blue Jackets. The team could use a kick in the ass, as they are now only 4 points ahead of 8th spot Colorado, who has 2 games in hand.