Johnny Canuck vs Lords of the Underworld

Share All sharing options for: Johnny Canuck vs Lords of the Underworld 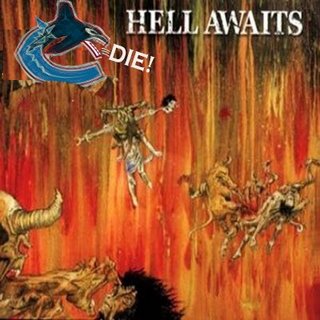 Two years ago the Canucks were labelled the Devils of the West because they trapped so well and defended leads better than most Western Conference teams. I don't think the same can be said about this year's version of the Canucks. Not yet anyway. But both teams still have something major in common: they have been playing without their star goaltenders since November. The Devils have been without Martin Brodeur since November 1st, and Brodeur was expected to miss 4 months with torn bicep tendons. The Canucks lost Luongo on November 22nd.
Yet the Devils have done something that the Canucks have not been able to do: WIN CONSISTENTLY WITHOUT THEIR #1 GOALIE. New Jersey did struggle as soon as Brodeur went out however. They would lose 5 of their next 6 games. But then they would win 9 of their next 10 after the skid. The Devils are 18-13-1 without Marty. They have lost 3 of their last 4 games, but still, they have performed rather admirably without Brodeur.
The Canucks are barely keeping their heads above water without the god known as Luongo. They have a 10-11-3 record in his absence. They have not won back to back games since December 14 and 17.
Luongo could potentially play against New Jersey tonight, but it is speculated he'll wait until Thursday against the Coyotes to make his long-anticipated return. What a difference he'll make to this insecure squad.

There are a lot of Canucks who are not 'rolling' right now.
There are plenty of Devils who are:
-Patrick Elias has arisen from the dead and is already approaching his points total from last year. He has 19 goals and 48 points in 42 games this year.
-Zach "attack" Parise is leading the team in scoring with 24 goals and 49 points in 42 games played. Tell me: How the hell is this guy only named to the Eastern Conference Allstar RESERVE LIST? Good Lord. A travesty.
-Brian Gionta is another player who has rebounded from a dismal 2007-08 campaign. He currently has 10 goals and 36 points in 41 games.

So if Luongo does not play we will have a battle of the backups. 2 teams with generally the same philosophy go head-to-head.

Can the Canucks put up a more consistent effort? I'm going to go with "yes". I also really doubt Sundin will take a late penalty this time around. In fact, given the rate of his improvement (and the fact that it's January 13, I think he could have a heck of a game.

Speaking of that, here is a little song to get you into the mood: