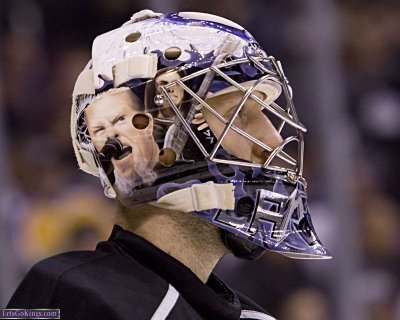 I believe he first started using this mask in mid-December. You can see James Hetfield belting out a tune and Kirk Hammett shredding a guitar solo. There's a St. Anger fist just behind Hetfield and a Metallica trademark "M" on the front. There is the Death Magnetic magnet from the album cover on top.
-This is not the first time he's had a Metallica tribute on his mask, as you can see here. Nice.
-Here is another one.
-Looks like that mask also had the Hulkster on there as well.
-Last season he donned another metal-themed mask that had the St. Anger fist on top with Angus Young and Slash on each side.

Jason talks about his love of Metallica and wrestling in this clip:

-This one is funny. Barbs is promoting Mr. Potato Head night in this clip.

-See if you can get through this interview with Labarbera from 2007. I couldn't.

-Jason definitely wore out his welcome in Los Angeles, as this fan "appreciation" thread shows.

-Barbs compares his style of play to.....wait for it....Sean Burke. Oh no. That would be another goalie from Vancouver's Goalie Graveyard Era. I'm cautiously kidding. Let's hope Labarbera can play consistently.

-Labarbera lives in Prince George. How do I know this? 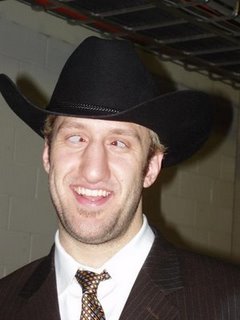 So...his teammates in L.A. and Manchester called him "Barbs" and that is the nickname he puts on his mask. What are some other names fans are throwing out there? (Sorry J, you are not going to like some of these)

- I've been calling him "Barbie" since the trade. But that's not nice. It'll stick though I think.

From the CDC forum: