Hodgson, Vancouver's "Next One" delivers in gold medal game

Share All sharing options for: Hodgson, Vancouver's "Next One" delivers in gold medal game 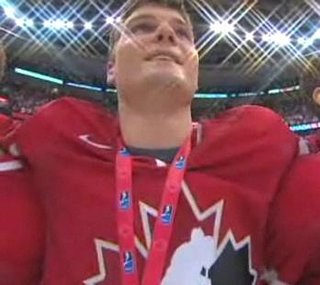 Cody Hodgson not only led Team Canada to a World Junior Championship gold with 3 points in the gold medal game, or led all players in scoring in the tournament. I think he has given Canucks fans some serious optimism about his future with our team.
Although John Tavares was named tournament MVP, TSN's Bob McKenzie said post game that he thought Hodgson was the best all-round player. That is a hard point to argue. Hodgson was named tournament first team all star as a forward with Tavares and Nikita Filatov.
Hodgson was drafted by the Canucks not only for his scoring and play making abilities, but also for his leadership and character skills. There is no doubt that he has all of the above qualities.
His time will come in Vancouver.

As a side note: Swedish goalie Jacob Markstrom played like a fool tonight. The Swedish team and media are angered at the lack of goaltender interference calls. But Markstrom dives so much he should get drafted by the Penguins. An embarrassment.
As soon as we went up 2-0 I knew the Swedes were "shitting in their pants." What a gutsy game.

Hodgson is scoring at nearly a 2-points-per-game pace with the Brampton Battalion this season as well.

Nice draft steal by Mike Gillis. Hodgson could be the next Trevor Linden, in a sense.
Exciting stuff. Congrats Cody and Team Canada on a deserved gold medal.