Leaving It All Out On The Ice

Share All sharing options for: Leaving It All Out On The Ice

I tend to remember the worst of times over the better of times. I can't help myself, I'm just that sort of person. The first fight as a kid? Yup. First chick who crushed my tiny heart? Yup. Realizing Santa (wait...do I have young readers? I can't possibly. But what if I do? Oh good grief)...forget it. Santa is great.

Anyway, I remember a time when there was hope and optimism as a Vancouver fan. It was October 2007, a few months shy of a run into the second round of the playoffs. And while getting ousted by Anaheim was tough to swallow, we took it in stride as the part of something better that was yet to come. Luongo was indeed a God, Vigneault could seemingly do no wrong and Brad Isbister was going to become the power forward he was forecasted to be. Ah yes, it was all good.

The season started at home against San Jose. I loaded up on drinks, fired up the liveblog and proceeded to describe one of the worst games I've had the misfortune to liveblog. The winner had to be that Jeremy Roenick, who should have retired about five times already, scored not once but twice on us.

I didn't know that would be a good indication for how the rest of the season went. Live and learn.

Which brings us to tonight...the good guys are having all kinds of problems. Goalie problems, Swedish problems, penalty problems, coaching problems...pick one. Sense of panic? Yup. Maybe we'll be better in a month? Yeah, thanks Hitch.

But tonight can still be different because tonight they still have a choice: enter the ASG break with their wounded pride and all kinds of questions swirling around them as the skid hits seven. Or pretend it's playoff 1 Vs 8 seed time and leave it all out on the ice against the best in the West.

Battle of Cali called for a slaughter last time. They were close, juuust a bit off.

History can't be this cruel. Not to these guys, not to yet another old man wanting one last shot, not another bout of humiliating destruction to a team from a state with no economy (I guess that could be any state, don't get technical on me now).

Win tonight and they set themselves up for some iota of confidence building after the break. They give themselves some momentum to build on for what will be a crucial February. They can breath just a bit easier.

Lose and the nooses will still be dangling from the trees. Get absolutely blown out and Gillis may tie the whole group up, stuff them into a cannon and fire them into the sun.

Do or die guys. We all know you're better then what we've seen. Now go show us. If nothing else, get angry. Get feisty. Show some emotion.

From the drop of the puck to the horn at the end, I want to see 20 plus faces roughly akin to this: 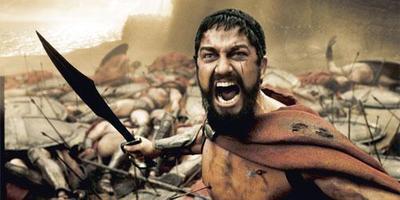 Get it done. Go Canucks.