Share All sharing options for: Full-blown frustration sets in as Mitchell and Raymond square off at Canucks practice 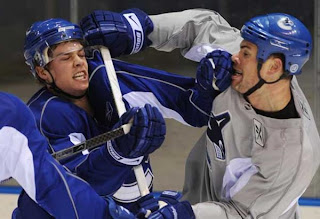 From the Vancouver Sun:

They can't win a game to save their lives, but the Vancouver Canucks have their game faces on at practice today at UBC.

Mitchell ran at Raymond during a drill and, when the speedy sophomore came back at the veteran in the corner, Mitchell punched Raymond in the head and cross-checked him hard on the shoulder. VIDEO OF THE INCIDENT

This only adds to speculations that team chemistry is in question, one of many problems that are plaguing the group.
I don't have many further comments or opinions on this depressing mess right now. It's tough to be positive. It's also too bad they couldn't go on a massive road trip to get away from the pressure-packed GM Place. But they have to wait until February 10 for that to happen. In the meantime they play Minnesota, Carolina and Chicago at home.
This could get ugly. At some point a change has to happen if this team cannot turn it around. I just hope that some kind of change happens before they get too far into the hole.

The Sun article also mentions that Mats Sundin was assigned to the Kesler-Burrows checking line. That may just work. There hasn't been much chemistry between Sundin and anyone else lately, except maybe Pavol Demitra, who remains out with a sore groin.

Below is a clip of several fights between teammates in the past. Remember the Probert-Primeau tilt in the Red Wings practice in 1994?

**UPDATE**
Here is some post-practice interviews. The players and coach like the aggression in practice and understand the frustration levels right now.

It appears that Wellwood and O'Brien are going to sit out against the Wild, while Rob Davison and Pavol Demitra will draw back in.

Image above from Vancouver Province