Dog House Demitra and mates getting worked over by coaches

Share All sharing options for: Dog House Demitra and mates getting worked over by coaches 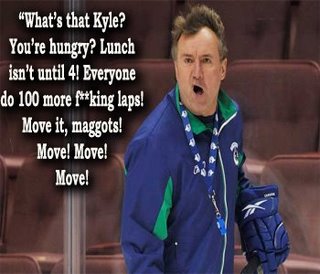 I hate to gloat...but Demitra is currently in Alain Vigneault's doghouse.

"I think in the last 13 games here he has scored two goals and one of those was the empty net in Edmonton," Vigneault said of Demitra.

"In those 13 games I think 10 games have been scoreless and for me it’s not so much the points as the fact he’s not getting a lot of chances offensively. Lately, defensively he hasn’t been as committed as he needs to be. He is one of the players we look for to be better."

"He has been given quite a few minutes here and I really gave him quite a few chances," Vigneault said. "For me, if you are not getting points but you are getting scoring chances, that’s a different thing. There’s not much going on there right now."

But it isn't just Demitra who is being called out. The whole team is feeling the wrath of the coaching squad for being complacent. And they are being worked hard in practice so that a message is sent. For more on this follow the above link the the Vancouver Sun article.