The Devils made them do it

Share All sharing options for: The Devils made them do it 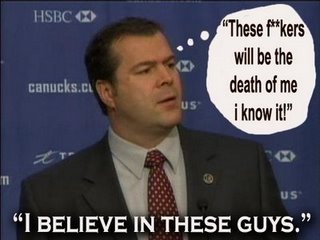 The Canucks keep finding ways to lose. After being yelled at, called out and worked hard in practice there was a fair bit of optimism for Canucks fans heading into this one. Maybe they would put together a full 60 minutes. Maybe Jason Labarbera would steal one, because Curtis Sanford had previously failed.
Nope. Labarbera looked terrible and allowed 2 questionable goals on his first 6 shots and was pulled. Sanford made almost the same gaff playing the puck behind his net and by 11:07 of the first period the Nuckleheads were down 3-0 to a team you really don't want to be trailing by that much.
The goalies let the team down primarily. The team let eachother down by coming out flat and getting outshot 12-4 in the first period. Sure, Vancouver clawed it's way back into it but that isn't the point. The game was lost in the first period.
Now Canucks fans pray that Roberto Luongo will return on Thursday to hopefully put a bandage over this gaping wound.
You know Luongo will not put up with this shit if he's playing. The first goal let in by Labarbera was not only a folly on his part for looking like a dying beached whale in his crease. There was a lack of communication from his defencemen there. Luongo would talk to his D-men about that. He'd give them hell. Labarbera said nothing and minutes later he slammed the bench door shut as he was pulled.
Deflating.
These backup goalies are not getting it done. However, when they play well the team in front of them doesn't bail them out. Fucking frustrating. Luongo's return had better stabilize the situation. If it doesn't, very soon Alain Vigneault's job will be at stake, if it isn't already. Oh yeah, it's true. Admit it. It doesn't take a rocket scientist to figure it out. Look at the standings. The Canucks have played more games than the teams below them and are now only 3 points away from losing a playoff spot.
It's a bad sign for a coach when he (and his assistant) calls his guys out and gives them the hollering and screaming treatment yet the team comes out like they did tonight. Post game Vigneault switched tones and calmly said he believes in this group. I've heard that before....from coaches that are clinging to a job.
Vigneault's system is good, but the players are not all buying into it. Gone is the defensive system that Vigneault wants at this point. This squad refuses to tighten up defensively.
It's saddening to watch the players post game riding their exercise bikes and trying to answer questions to the reporters as to "what the hell is going on right now." They say they don't know or play stupid most of the time. But at least Ryan Kesler mentioned the "tighten up defensively" part. Regardless you can sense the frustration in the group.
That frustration needs to be dealt with soon. Winning will fix that.

Oh by the way, kudos to Pavol Demitra for responding positively after being called out. He went from demotion to promotion within about 20:00. Good job Pavol. And good job line 3.

Tip of the hat to the Devils, who showed us what it takes to win without their superstar goalie in net.

I think the Canucks PPV panel made a good point about Sundin and Luongo being distractions. That's about the best bang for my $13 spent on this fucking PPV game.
Soon we will see the impact Luongo has on this team when he plays.

By the way, where was Sundin post game? On a plane to Sweden I'll bet!