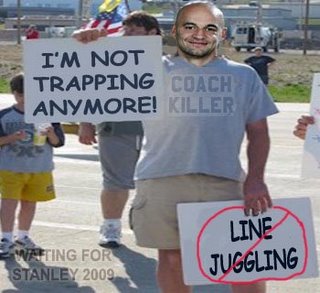 Uh-oh. The coach-killing ensues. From the Province:

Demitra, who is expected to miss his third straight game with a groin injury tonight, expressed his displeasure with the rotating lines.

"Noboby likes that," Demitra said. "When you play with different guys all the time, it's tough.

Demitra is hoping he will play with Mats Sundin again when he's healthy.


Opinion #1
I think most fans would agree with Pavol's displeasure. I think it's a double-edged sword. Vigneault gives playing minutes to those who EARN IT. That involves shuffling lines to bump players up and down. But hypocritically, he won't separate the Sedins, even if they stink it up for a few games. You can't have that double-standard.

Opinion #2
It's almost as if Vigneault is a knee-jerk kind of coach, and maybe needs a little more patience with his lines at times. He looks for instant chemistry. If he finds it he sticks with it. If he finds it and loses it he switches up, most of the time.

Opinion #3
Besides his defence, AV has obviously been the most content with the Sedins and Kesler and Burrows, and I suppose Hordichuk and Johnson. I think it's fair to say that those guys put out more consistently than the rest. But it gets pretty easy to question the work ethic and productivity of the rest. Let's start with the whistle-blower named Demitra. He is streaky at best. He can be a floater. He can be a defensive hazard. Then he can be brilliant. That isn't going to cut it with Vigneault. Pyatt, Bernier, Hansen, Wellwood and Raymond (Sundin gets a pass for now, but not for much longer), have all been great at times yet eventually turn into duds when given the chance with more minutes on a scoring line. Can we fairly blame Vigneault for that? How patient are we expecting AV to be? At what point can we say that those players currently lack the skill at the NHL level and are not top 6 forwards?
Beyond the imbalance of favoritism shown towards the Twins, Kesler and Burrows, which is both fair and unfair at times, I support Vigneault's style. Work hard, get results and you get promoted.

Opinion #4
Now, look at who is doing the coach bashing...Demitra. The guy who isn't even playing right now because **big fucking surprise** he's injured AGAIN. The guy who kissed the ass of his former agent and now Canucks GM Mike Gillis to play here and play here under his own ideals on how the team should be coached. The guy who I should have punched in the mouth when I ran into him in Vancouver 2 months back, rather than slap him on the shoulder. Where is this media leak going to get Demitra? Is he truly speaking for the rest of the team or out of selfish intent? Is this going to make him a revolutionary? The players have already stated week that it isn't AV, it's them who are to step it up.
This isn't what the team needed right now. Or, maybe I'm blind. Maybe this idiot is going to get Vigneault fired. Maybe he's going to talk his sorry ass out of town. Does Pavol have a no-trade clause?
I don't know anymore.
I work in management. If an employee pulled something like this on me there would be repercussions. I would flog this fucker right now. What is he contributing to this team in it's darkest hour? Lip service. And he's getting paid $4 million for it.
It will be interesting to hear Vigneault's response. It will be even more interesting (or possibly heartbreaking) to see what happens if this team doesn't start winning soon.

Keep in mind though, that upper management has went on record this week saying that Alain Vigneault is not going to be fired. Alain Vigneault then threw out an open challenge to his players yesterday, including saying

"Players have been treated real well by this organization," Vigneault said. "Since Mike (general manager Mike Gillis) has come in here, he’s gone out of his way to make sure they have everything they need. It’s payback time. It’s time to play here. That’s what we expect from them and that’s what we’re going to get tomorrow."

Looks like all of management is tight in Vancouver doesn't it?
That would leave Demitra with his ass exposed to the world. That would mean that maybe it is he who needs to be dismissed. You can't start a shit storm without having any backup.

Interestingly enough, these comments from Demitra come on heels of meetings held between Gillis/management and each player individually.