There are some concerns being thrown out there that Mats Sundin's midseason arrival may hurt his performance because he missed training camp, etc. References to Teemu Selanne's (and Scott Niedermayer's) indecisiveness last season have been mentioned over and over again, and how they started out slow.
Well let me focus on Selanne because he is a forward and is nearly the same age as Sundin. Selanne turns 38 on July 3. Sundin turns 38 on February 13.
Selanne made up his mind in late January 2008 that he would play and was signed by the Ducks on January 28. His first game was February 5. Check out his game-by-game stats after his return (click on the image if you can't read it): 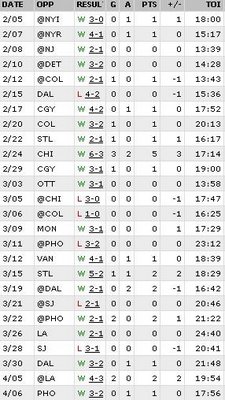 Generally, it's safe to say that statistically Selanne suffered in points per game. He finished last season with 12 goals and 23 points in 26 games. In his first 12 games back he had 12 points (a 5-point game in there helped that).
In his previous 2 full seasons with the Ducks he scored 184 points in 162 games.
After playing right off the start for the Ducks this year, Selanne has 27 points in 33 games, but is now injured.

Look at the team record though: the Ducks won 11 of their next 12 games with Teemu in the lineup. They won 20 of their last 26 games of the season with Teemu, or, Buzz Lightyear as I like to call him.
Through January right up to the game before Selanne arrived, the Ducks had 8 wins and 7 losses. They had lost 6 games in a row right before Selanne started playing.

So what am I trying to say? Basically that Selanne is an idiot. OK, I kid. His points total slid when he joined the Ducks half way through last season. He continued the same points-per-game trend this year before getting injured.
Ironically, the same trend is happening to Scott Niedermayer.
Bottom line: It's too difficult to compare Sundin and Selanne because the circumstances are too different.
Selanne has been inconsistent in his career. Sundin has not.
Sundin is joining a new team, where Selanne didn't. Let's see how that plays out.
I just don't get why people say Selanne started slow when he returned midseason. I don't see it on paper anyway. If anything he consistently produced less.
Let's hope Sundin can kick start the Canucks much like Selanne did last year. I can't see how he won't.
As for how may points Sundin will get... it's up in the air. I'm going to guess a point per game pace because he is one consistent dude, new team or not.