Wild 4 Canucks 3: This ain't good, but it's getting better

Share All sharing options for: Wild 4 Canucks 3: This ain't good, but it's getting better 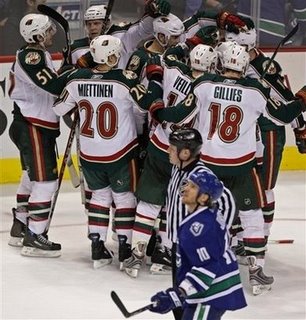 Turnovers.
Fragility.
Team tentativeness.
Aggressive play but being penalized for it.
Boo'd all over the ice.
That was period 1, as the Wild lead 2-0.
Kyle Clutterbuck got under the Canucks' skin. What a pain in the ass he is.

You can see the difference between the 2 teams. The Wild lost to the Oilers last night, yet they waltz into GM Place and play a really confident and loose first period. The Canucks are forcing every play.
I'd have to give the Sedin-Pyatt line some props in period 1. They were pretty solid.

PERIOD 2
Well, then Clutterbuck (I call him Clusterfuck) gets too aggressive and takes a boarding major on Alex Burrows. Game misconduct. The Canucks took over the momentum from that point. The Canucks had over 7 shots on the 5 minute PP but scored not.
Ryan Kesler had to crash through Niklas Backstrom to cut the Wild lead to 2-1.
When the Wild started putting on pressure, Luongo made a massive blocker save on Bouchard. That looked like Kiprussoff's save from yesterday. Wow.
Canucks outshot the Wild 13-7 in that period. They looked a lot better.
It's going to be tough to beat the Wild's trap. But it's not impossible.

PERIOD 3 and OT
The Canucks just kept coming. They wouldn't let up on the Wild at all. Yet Minnesota played their trapping style and prevailed. But not by much. Kesler tied the game with 15 seconds left after roofing a shot over Backstrom. But a Dank Sedin received a marginal hooking call in OT and MA Bergeron made the Canucks pay. When I say marginal, I mean that Sedin was trying to poke the puck to his brother who was still in the Wild zone. The Wild player did a 180 while falling. Alain Vigneault called it a dive in his post game presser.
Mike Milbury made a good point post game about the Canucks shooting low on Backstrom for most of the night. Backstrom will eat those up on most occasions. Gotta roof that puck more, boys!

Alain Vigneault sat Mats Sundin on the bench on the 6 on 4 for the Canucks near the end of the game. He stated post game that Sundin has to be better, and he is right. Sundin showed a few flashes tonight but was outplayed by nearly everybody. Eventually he is going to be better. Eventually.

Yeah, the Canucks find ways to lose. I thought they lost this mostly in the first period. They were too tentative and the Wild made them pay, being up 2-0 after 1 period. The Canucks fought back but never had a lead. You can't go down 2-0 like that to the Wild.

As much as Canuck life is stinky right now, I'll take the 1 point in the OT loss.

The penalty kill needs a bit of work. It wasn't terrible, but just not quite there. The Wild scored 2 PP goals tonight. So did Ryan Kesler, actually.

To all of you who bash the trap...I disagree with you. I saw Minny play it tonight and it's excellent. Just get a lead and trap, trap trap. The Wild forced turnovers while trapping and capitalized. Reminds me of how Vancouver played at one time....

The Canucks are "on the cusp of turning it around" as Kelly Hrudey mentioned. It's just too bad that the next 2 games against Carolina and then Chicago are at home. It would be great for them to get out on the road. I'd like to point out that the GM Place crowd sounded a lot better tonight. They picked up the noise level as the Canucks picked up their intensity level. But still, that is a pressure cooker of a place to play in when the team struggles.

We wanted the Canucks to shoot more and they did. 40 shots to the Wild's 27. Damn you, Backstrom!