Canucks-Wild Preview: God help us all

Share All sharing options for: Canucks-Wild Preview: God help us all 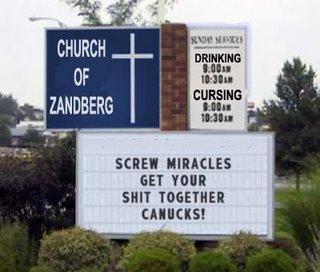 So there is isn't really much else to say except for what players will be playing and who won't.

Pavol Demitra will not play against his former team.
Mike Brown will play. We could use the grit.
Kyle Wellwood will play on a line with Jannik Hansen and Steve Bernier.
Mats Sundin will play with Kesler and Burrows, which I think is a great idea. Kesler and Burrows are basically line 2 players anyways.
Mason Raymond is expected to sit out with Shane O'Brien. Strange how 2 of the 3 players involved in the scuffle at practice on Thursday sit out.
Rob Davison will play in O'Brien's stead.

The Wild lost a disappointing game to the Oilers tonight. They will be whipped and drilled by coach Jacques Lemaire's to win their game against Vancouver.

It's tough to look at the Western Conference standings right now. The Canucks have 51 points and are 2 points from a playoff spot. A loss against the Wild will once again put heaps of pressure on the team.
I really don't know what to expect from the Canucks at this point. They are trying to say all the right things in their 7 game slump, but it is all just lip service to me. These next 3 games will be crucial. All 3 are at home, where they are atrocious. They could very well lose all 3, as GM Place is not such a friendly place to play in lately. If they lose the next 3, Alain Vigneault could be fired, OR, the team will go on the road and turn it around.
Doesn't that bother you that the team plays with so much fucking anxiety at GM Place? What does that say about the team? What does that say about the fans? Well, I've had a few drinks so I'll say this: Canucks fans can be the worst fans in the League. Pessimistic. Doomsayers. How about the fans get a little more into it more consistently and cheer the team on? The players can use all the help they can get.

I know the Devils have been rolling lately, so their fans are optimistic. But when they were down with under a minute to go against the Penguins tonight you could hear the fans screaming "Let's go Devils" as the clock winded down. The Devils never quit, tied the game, won in OT, and sent Crosby home crying.
Now THERE is a team that has their shit together. Confidence is everything. Jamie Langenbrunner is everything. Jesus, what a captain he is.
To me, the Devils are the model team. They play Brent Sutter's system so well. Sure they got outshot by (I believe a 43-16 margin) yet they still win. They lose Brodeur long term and still win. When they had chances they made it count. Plus they got breaks. That's what happens to a team that is rolling and has confidence.
Can someone please tell me how Sundin can start off so sluggish after a long layoff yet Brendan Shanahan can return after more time off than Mats, play 5 games, and have 3 goals and 1 assist? Shanahan turned 40 on January 23. He's so clutch. He also is playing with better talent and has a better shot.
Anyways, I'm just ranting. I'm not losing faith in this Canucks team. Why? Because I believe that once they win a game they will turn it around. If they don't win any games, very soon Mike Gillis will do SOMETHING to change it up. All hope is not lost.