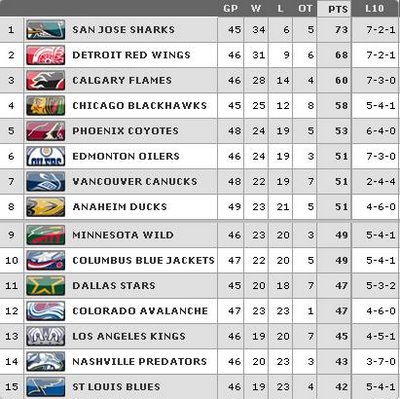 Losses by the Blue Jackets, Avalanche and Ducks tonight have provided the Canucks with some fortune. They still barely hold on to 7th spot. That's insane considering that they have lost 6 games in a row and collected only 2 of a possible 12 points in those games. From what I can recall, some of this fortune is a combo of the Canucks having a 12-6-2 record before Luongo was injured and the "barely treading water" 10-12-3 record while Luongo was injured. It is also a testament to the teams holding the 5th-12th spots in the West, and how average they have been. Yes, the Canucks still have life. Yes, they are slowly improving.
The concerning issue right now is that every team just behind the Canucks (minus the 9th place Ducks) has 1, 2 or 3 games in hand on them. Yet not one of them looks poised to make any major use of those games in hand. The Wild are sans Gaborik, the Jackets are/were riding a hot goalie in Steve Mason, the Stars have struggled with consistency (even though they shouldn't be) and the Avalanche are riddled with injuries as well.
The Flames are going to be awfully tough to catch down the stretch as they aren't showing many signs of slowing down. Nice shootout goal by Bertuzzi tonight to clinch the win.
The fact that the Oilers are doing as well as they are doesn't surprise me. The fact that they struggled so mightily earlier in the season did. But with Roloson playing as well as he is, Eric Cole coming alive finally, and the strong return of the enigmatic Ales Hemsky, the Coilers look to be in good shape.
Back to the Canucks. Yes I am feeling more and more optimistic about this bunch. They keep looking better and better. The San Jose game proved they can still play Vigneault's style and I like that. It was also great to see Luongo return to form so quickly.
Some are saying that Luongo should skip the All Star game and rest his groin. From what I've heard from a goaltender/goalie coach is that you don't really want to sit around and rest after returning from a groin injury. It's better to keep playing.
Canucks management is cautioning him.

"It’s a huge, huge honor for a player to be selected to play in the all-star game and we certainly do not want to deprive Roberto -- or any player -- of that honor," Canuck assistant general manager Laurence Gilman explained late Wednesday. "It’s a matter of weighing what’s in the best interest of the team and Roberto. Ultimately, the decision is his."

If he aggravates his groin at the All Star weekend festivities I swear I'll toss myself off a bridge into a river with weights tied to my feet.
Word is that Mats Sundin will spend the week off in Vancouver and continue working out. That is a good show of dedication on his part. He simply has not found his groove yet for the most part. He will. Should we call Doug Gilmour or Alex Mogilny out of retirement? Let's re-unite the Sundin-Roberts-Mogilny line! I kid. But that was a good line for the Leafs a few years back.
And speaking of the Leafs, I want to wish former Leafs coach Pat Burns nothing but success in is latest bout with lung cancer. The guy is like John Wayne. If anyone can get through this, Burns can. He is such a strong person, as John Torterella alluded to today.
Burns is one of my fave all-time coaches. Is this guy tough or what? See below. Listen closely to this tantrum by Burns...

Here is another rant by Burns. You gotta love his spirit.