Canucks-Sharks Preview: The Glass is Half Full

Share All sharing options for: Canucks-Sharks Preview: The Glass is Half Full 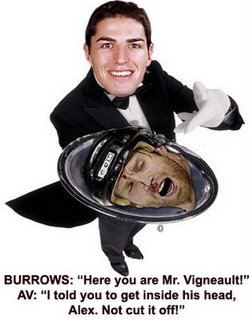 Too much gore for the post image? Oh well.
The Canucks finally get away from home to play the Sharks at the tank tomorrow/today. Before this big homestand they just failed at miserably, we were saying how much they needed to get off the road and away from the insane schedule. Now it's the other way around. I'm sure it's too tense for a team struggling with having a fragile confidence level to be playing that many games at home.
Unfortunately they play the best team in the West on the road before the All Star break hits.
Last time these 2 teams played wasn't all that long ago, and the Sharks had their way with us. I'm thinking the teams' effort may be better this time around, even if the end result is possibly the same.
There was some fight in the Canucks' game against the Blue Jackets. After the 4 goals against brain fart the Canucks showed resiliency to tie it up at 5. They showed that they aren't quitting. That's a good thing. That is one reason why I think the glass is half full with this team and not half empty.
Another reason? Sundin is looking better. Luongo and Sundin are going to need more time to play at the level that we expect of them. Sundin is progressing. Luongo has only had 2 games under his belt since his return and looks like he needs a lot of work. But he'll get there. Luongo called himself a "work in progress" after the loss to Columbus and that he is.
The defence, with Bieksa being center stage for his follies will improve. There just isn't a lot of confidence there right now and the D is not making smart decisions getting the puck out of their zone. But they were being smart earlier in the season. They'll get back to that smart play.

Demitra's groin injury shouldn't spell demise. When he hurt his ribs in late October, the Canucks went 6-2-1 in his absence. The were 3-4-0 before that injury and had lost the previous 3 straight games. Demitra is not the cog that holds this machine together. He's only an inconsistent drifting part of it.

Sami Salo is ready to play against the Sharks. Speaking of not getting the puck out of their zone...Salo can help with that, and he can also play a tonne of minutes. Oh and his shot on the power play is missed. But remember, Salo is not going to save the day. The team as a whole needs to build on the positives of the game against Columbus.