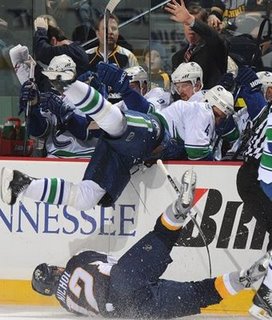 UPDATE: A 2-1 win. Phew! Labarbera is the first star of the game. He is unfortunately affectionatly known as Barbie or Lady Baba on CDC's live blog. We'll have to think of something more manly.

Jason Labarbera will start in goal tonight...and hopefully finish. Curtis Sanford's groin problem isn't going away anytime soon either as he is listed as week to week. Sounds familiar. I sure hope Labarbera shows us something good.

Mike Halford of Orlando Kurtenblog has a great Labarbera profile post up.

If the Canucks are going to continue their win-one lose-one trend then tonight they'll beat the Predators. The Canucks have beaten Nashville twice this year: 3-1 and 4-0. Their 3-1 win on December 9th didn't come without controversy. The laid out some huge hits, and Burrows was accused of leaving his feet to hit JP Dumont, Davison accused of a head shot. What a game. Check out the highlights here.

The Preds just may come out with a feisty effort to gain some revenge.

"We questioned some of the hits. We were very public about that," Coach Barry Trotz said." … They are a good team, they are a physical team, and they are coming into our building and we have to make sure we win a hockey game, and that's primary." - The Tennessean

Yeah sure. Scott Nichol has missed every game since that devastating Rob Davison hit (pictured- Getty images). Concussion. He just resumed skating about 24 hours ago according to the Tennessean. Wow.

Vancouver needs the win to catch up to Calgary, who now leads the Northwest by 5 points. Nashville dropped a few slots and out of a playoff spot recently. A win for them puts them back in. Look at the dog fight in the West. Unreal.

Come on, Canucks. Win this one for me. I have a New Years Day hangover and I need something to cheer me up!