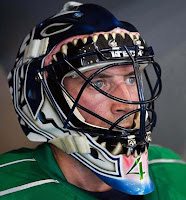 Although Jason Labarbera struggled in last night's loss to the Devils, the Canucks see something in Barbie that Sanford lacks. Size could be part of it. His record prior with the Canucks prior to his flaws last night wasn't all that bad. Ian Clark will continually work with Labarbera to improve his composure, stance, style and speed. In the meantime if Luongo stays healthy he will play almost all of the remaining games give or take a few.
Sanford seemed well-liked by his teammates and fans alike. He held a competition in the pre-season for an artist to design his mask. All the best in the future, Sandman.

"It was a very challenging decision for us," said head coach Alain Vigneault. "Curtis is not only really respected and liked by his teammates but the whole coaching staff and management feel exactly the same way."

Vigneault did not say why the Canucks chose Labarbera over Sanford except to say that he told Sandman this morning and that if he clears waivers he'll play in Manitoba.

The good news out of all this is that Roberto Luongo will make his debut on Thursday against the Coyotes.