Canucks period-by-period vs the Blue Jackets

Share All sharing options for: Canucks period-by-period vs the Blue Jackets 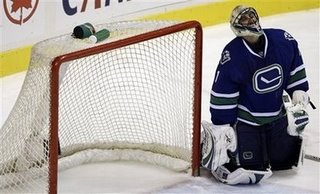 It could have been a devastating start for Vancouver. Kevin Bieksa coughed the puck up to Kristian "The Weasel" Huselius who went in all alone on Luongo but lost control of the puck. This was very early into the game.
Then the Canucks shrugged that off and went on the attack for a long stretch, with Taylor Pyatt scoring a goal top shelf on Steve Mason. Both Sedins assisted on that. There is why Pyatt is on the top line. He used his size to get open. In fact, I thought Taylor Pyatt was pretty good in period 1.
The Jackets tied it almost 4 minutes later with a beauty 3 way passing play with Manny Malhotra tapping the puck past Luongo, who is sporting his ugly "V" mask tonight.
It seemed like the Canucks were on their heels after that. They repeatedly could not get the puck out of their zone and lost battles for the puck or failed to clear. That being said, they remained composed in front of Luongo, limiting the decent scoring chances against. Luongo did make a super save at one point however.
The Canucks are playing more physical yet have not had a penalty against yet. It was Columbus who gave the Canucks 2 PP chances, but no goals ensued.
You can see Sundin getting better as the game goes on. He has tremendous size and speed.
Wellwood is playing very well after being benched.
The Canucks came on late in the first. Let's see if they can carry that over.
Ohlund took a puck off the ankle I think and has not played since. A big loss if he doesn't come back.

The Canucks did carry momentum into the 2nd frame, scoring 2 goals by Mats Sundin (nice backhander) and Steve Bernier. But a bogus call on Jannik Hansen got the ball rolling for Columbus and the fragility shattered for Vancouver. Jason Williams scored on the power play and almost 2 minutes later with 1 minutes left on the clock, Rick Nash scores a beauty wrap around goal, as Kesler could not contain him. Nash's goal was the result of the Canucks once again not getting the puck out of their zone.
Nash has a goal and 2 assists so far. The score is tied at 3.
The Canucks were looking quite poised weren't they? Well now we'll see how they can deal with adversity this time around. This will not sit well with the media or fans if they lose like this. The game was in their hands.
The Jackets' forecheck remains tenacious. The Canucks' is passive.
Nice fight between Hordichuk and Boll. A true heavyweight tilt.

Pyatt and Bernier have 3 shots each, leading both teams. Both have a goal.
The Sedins are going tonight. Good to see.

Yeah, the fragility really showed to start the 3rd period as the Jackets scored 2 goals (Commodore and Torres) in the first 2:11. That added up to 4 goals in about 5 minutes going back to the 2nd period. Commodore's goal was the result of a comedy of errors, as Luongo had dropped his stick, the Canucks couldn't clear the puck (again) and Hansen was trying to hand Louie his stick back. Commodore 64 just shot it in past the distracted Luongo.
Torres' goal was just lousy defensive coverage. I think 3 Canucks chased him behind the net. Lame-o.
But the Canucks came back. We thought they were a 'goner' but the Canucks came back, they just couldn't stay away. A power play goal 2 minutes later sparked the team. Less than 2 minutes after that Kevins Bieksa scored one off Nash's butt.
Then the game settled down a bit after that.

The story in overtime was Kevin Bieksa, and not in a good way either. He coughed the puck up while heading past center leading to a golden Jackets chance. Then he took hooking penalty as he lost the foot race with a Jacket player who streaked by him. The Canucks killed that power play off quite effectively. The Sedins had a glorious chance and over-passed on the play. This game went to a shootout.

Not even close. Both Jason Williams and Nash made it look easy on Luongo and Wellwood and Sundin missed their chances.

6-5 Jackets. At least we looked better in general and got 1 point on this 5-game homestand.
It still stings though, doesn't it?

-Pavol Demitra left the game at some point and didn't play in the 3rd period. Not sure what happened there. **UPDATE** Groin injury. Big fucking surprise.
Too much excitement for him I guess. Glass Joe 2. Sami Salo is Glass Joe.