Canucks look to avoid getting Thrashed in Atlanta / Live Blog

Share All sharing options for: Canucks look to avoid getting Thrashed in Atlanta / Live Blog 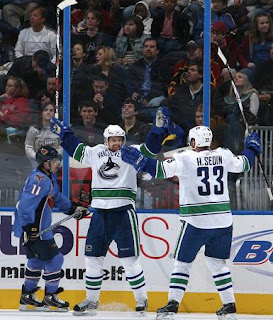 A season-high five-game winning streak had Atlanta at 7-7-2 on Nov. 14. Since then, though, rookie coach John Anderson's club has been dreadful.

The Thrashers have posted a 5-14-3 record, and have failed to string together back-to-back wins in that span. Ilya Kovalchuk scored on Wednesday but Atlanta (12-21-5) lost its fourth in a row, 3-1 to Carolina.

"We lose again, so it really doesn't do anything," said Kovalchuk, who leads the Thrashers with 25 assists and 37 points.

Kovalchuk scored his first goal in 12 games (I believe) in Atlanta's last game, a 3-1 loss to the Hurricanes.
-The Thrashers rank 9th in the NHL on the power play. They rank 30th on the penalty kill.
- When trailing after 1 period, the Thrashers have a dismal winning percentage (.067%). So the Canucks need to get the first goal and bury these guys early.

Speaking of goals, those are becoming a little hard to come by for Vancouver lately. They have only scored 9 goals in their last 5 games. There are too many Canucks who have not scored for an extended period of time. Jannik Hansen has not scored in 26 games I hear. Kyle Wellwood has not bagged a goal since that "batting out of the air" special weeks ago. I won't even start with Steve Bernier. When these kinds of droughts happen, the pressure falls squarely on the Sedins, which is the problem we were trying to avoid in the first place this season.
Vancouver's Swedes must be stoked about Sundin playing. They have combined for 12 points in those 9 goals scored over the past 5 games. But these guys need help. Whatever goalie we put in net needs more support.
I swear the Canucks were almost playing to lose last night during large stretches of that game. They barely bailed out Jason "Barbie" Labarbara in the end. Too much passing and not enough shooting. It's frustrating to watch. I don't see much from this squad that would suggest much change. Then again, this team is unpredictable.
So I am not predicting a blow out by Vancouver over Atlanta tonight. At the same time, this could be a ripe time for some Canucks to get out of their slumps. Atlanta has allowed more goals against than any other team in the NHL and they sit in 14th spot in the East. They have a struggling Kovalchuk, who is rumored to be traded soon.
As sucky as the Thrashers are, they still have players that can do damage. Kovalchuk, Kozlov, Todd White, Colby Armstrong, Bryan Little....yeah you don't hear much about these guys in Sucklanta.
A win by Vancouver and loss by 8th spot Colorado would put us 8 points ahead of them. Sounds like a good idea. It would also put us 1 point behind of the red hot burning Flames. But the Flames will still have 3 games in hand. Huh...
Go Nucks! Finish stupid mini road trip in convincing fashion!

Word is that Labarbera will start again tonight, and he SHOULD. Let's see what this guy is made of.

The last time these 2 teams played was back in February 2008. The Canucks won 2-1. The Thrashers had Marian Hossa back then. We had Roberto Luongo. That game means nothing now.

Live Blog at Canucks.com. or below

If you are visiting the live blog chat room, remember that Cover It Live only allows 10 people to have their comments automatically added. Everyone else is individually moderated after the 10 maximum is reached. If your comment takes a few seconds to appear..well that's why. Anton Sledgehammer, the Fan Zone master is usually pretty quick to mod and add your comments so don't despair, and COME AND HANG OUT. It's always a hoot.