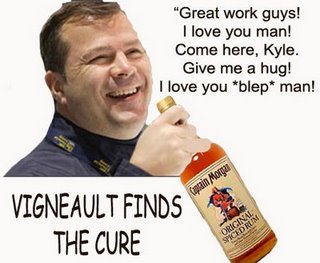 -Word on the street is that Kyle Wellwood will draw back in and Mason Raymond will sit out. No confirmation of that yet.
**UPDATE**
This was quoted from somewhere at the CDC Forum:

Mason Raymond will be the odd-man out tonight as Wellwood returns to the lineup in a role on the fourth line. Raymond has scored nine goals in an inconsistent season. He definitely needs some work on his game but won't be getting that in the AHL.
Raymond has played 95 NHL games. After 80 he lost his waiver wire exemption.
"Without a doubt he couldn't clear waivers" Vigneault said. "He needs waivers to go down an that's just not an option anymore"


-Rick Nash, who has missed the last 4 games with a lower body injury is expected to play. Damn. C Jiri Novotny (upper body), C Derick Brassard (right shoulder surgery), LW Jason Chimera (groin), D Rostislav Klesla (bruised foot), and G Pascal Leclaire (ankle) are all on the injury reserve for Columbus. The Canucks will probably still be without Sami Salo. Salo tore a butt muscle when he sat down on the toilet to poop.
**UPDATE**
From the Province:

He should finally make his return tonight against Columbus.
"He's done everything in practice and it looks like he's pain free," head coach Alain Vigneault said.
Salo was coy Saturday and said his status hasn't changed.
"The bone has to be fully healed," Salo said. "You don't want to go out there if you can't do everything on the ice."


-No Pascal Leclaire. No problem. The Jackets have a potential rookie of the year in goal named Steve Mason.
-Columbus has won both games against Vancouver this year: 3-2 on December 1st and 4-2 on October 21st. Rick Nash had 2 goals and 2 assists in those games. Kyle Wellwood had 2 goals and 1 assist.
-The Canucks will play more physically, according to Ryan Kesler.

"We are going to take hard-working penalties, It’s the hooking and holding that we’re not going to take. If we play physical and take roughing or whatever, a punch in the head, we’ll kill those off."

Great plan. That part has been lacking in their game. Something needs to spark this club.
-Scoring the first goal wouldn't be a bad idea either. In their last 3 losses, the Canucks gave up the first 4 consecutive goals to Phoenix, 3 goals to New Jersey and 1 to San Jose. They obviously have not held a lead in any of those games.
-Columbus is 7-3-0 in their last 10 games. They are surging. They trail Vancouver by 3 points and can gain a playoff spot with a win tonight. Oh, and they have 2 games in hand.
-Let's see if the bleeding stops tonight. C'mon guys, it's like Yoda, I mean AV said: don't think....do!

The Canucks looked confident today according to the Province. Luongo said:

"You can’t take things for granted. Just because we’re good on paper doesn’t mean it’s going to happen on the ice. Look at Pittsburgh, they have the league’s two leading scorers and they’re not even in a playoff spot. We have to work hard, we have to play hard and we have to play smart. All those things translate into success. We can have the best team on paper, but if we don’t put it together on the ice, it’s not going to happen. "

We are going to turn things around, and when we do, there is going to be a lot of excitement in this city."

Canucks.com Fan Zone Live Blog can be found here. Several fans have been granted media passes for this as well as Canucks practices. This is a great thing for the organization to do and so far it is going very well, increasing the trust and relationship between the organization and bloggers.

Just saw this image at CDC under the name ramirez inc: 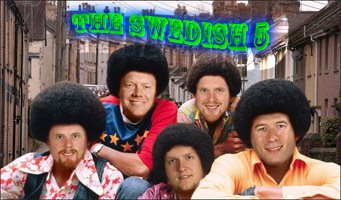 Beauty! ABC! Easy as 1-2-3! The big difference here is that I don't see one of the Swedes turning black or opening up a kid park.