Share All sharing options for: Canucks' 2009-10 schedule being evaluated already 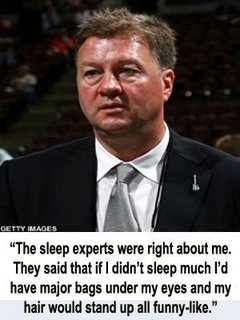 The travel issue has always been a contentious one for the Canucks, and Mike Gillis has been taking pro-active steps with the NHL office to try and ensure the Canucks don't keep going through those kind of schedules. He had a lengthy meeting earlier this week with league officials, and told BMac and Rintoul that the Canucks may get a much better look next season.

"I think we have a great chance. In fact, we've got a draft in place for about 38 of our road games for next season already, which is unheard of. They made us a number one priority in terms of travel for a variety of reasons. One of them is injury history, crossing borders, and the fact that we don't have a team within two or three hours of us. So they agreed to make concessions based on a number of different factors and we feel really good about where we're headed with them. We feel really good about their understanding now, and that they're really willing to work with us to get a better road schedule in place."

Amen! Let it be done!
Mike Gillis on the bandwagon jumpers:

"People who are prepared to jump off bridges are really not looking realistically at the situation that we faced. I mean, the number of injuries we had and the players who were injured creates enormous mental pressure on the other players. And to continue to play at the level that we're playing at was unrealistic. Every team goes through a lull."

Back to the lousy schedule. Remember when news was out that the Canucks had fatigue experts come in to assess the Canucks' schedule and stamina? Well according to Gillis these experts were close to correct.

"When we did the Fatigue Management Program this year, those guys predicted where we would have a real problem. And it's not ironic, it happened when we played that three-game segment where we played in Nashville and then went to Atlanta (Jan 1st and 2nd), they predicted that after that we would have a serious fatigue issue because of the number of games we played in the previous ten days and the kind of travel. And they were bang-on."

Interesting. This is a tricky thing. It can either be bang-on science or a mental issue if the players were aware of when they would most likely burn out. Sometimes euphoria can be a beautiful thing. In fact, I live by it most of the time.