Share All sharing options for: Banged up but well rested Blues stumble into GM Place tonight 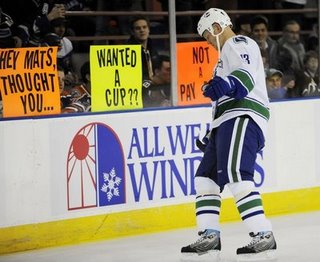 No Paul Kariya.
No Andy McDonald.
No Erik Johnson.
No TJ Oshie.
No Eric Brewer.
No DJ King.
No Jay McKee.

And you thought the Canucks had injury issues!

I see some people are annoyed that Mats Sundin is still getting massive coverage at NHL sites, including TSN. Well I think the annoyance comes from bitterness and idiocy to be blunt with you. TSN = Toronto Sports Network. Guess what, buttheads? We have a superstar player in our lineup now who used to be a Leaf. Get used to it. The Canucks are finally getting the recognition that they deserve from eastern-based major sports sites (TSN, Sportsnet, etc.) even if it took a Mats Sundin signing to do it.
Sundin will go up against 2 former teammates tonight in Alex Steen and Carlo Colaicovo who were traded to the Blues in the Lee Stempniak deal.

This is the first time the Canucks will play the Blues this season, and not the last.
The Blues have won 2 of their last 5, as has Vancouver. But the St. Louis has a 3-7 record in their last 10 and last in the Western Conference where Vancouver is 4-4-2, and 2 points behind 4th place Chicago.

The Blues have not played for 5 days. Holy hell, who makes their schedule?

Check out the Blues' last game, a 5-2 win, over the Jackets. 4 of their goals were scored on the power play and the other a shorthanded goal. Special teams at it's finest.

Remember when Mike Gillis tried to pry restricted free agent David Backes from the Blues this summer (which the Blues matched)? Well Backes is 5th in team scoring with 12 goals and 19 points in 39 games. Keith Tkachuk is slowing a bit but is still effective. Patrick Berglund is coming of age.

The Blues are not to be underestimated. But we really should be demolishing a team that is last in our Conference. But we also said that about Atlanta and then lost to them. I expect a different result tonight.
Mats Sundin may not put up any points again tonight, but his presence is welcomed. It's a pleasant distraction to the opposing teams. Last game, Vancouver's 3rd line became beneficiaries of that and combined for 8 points.
I heard some fools on CBC radio whining that Sundin isn't worth his price tag. To you I say: watch hockey a little more before you run your mouth. For one, it's too early to judge. Secondly, Vancouver is even more of an exciting team to watch now with the presence of a superstar forward. These are good times in Canucks Land. Stop being so negative.

Jason Jaffray was put on waivers this morning because he had to be in order to be sent back down to Manitoba. This was done to make way for Ryan Johnson. Jannik Hansen's demotion and then recall was obviously to send a message to the Dane to get his game in order. Alain Vigneault had nothing but good things to say about Jaffray today.

"He’s played well, he’s done everything that we expect, that I expect from him," said Vigneault of the gritty forward yesterday after practice. "I know Jaff from back [in Manitoba], he’s dependable at both of the ends of the ice, he plays with an edge, he can help out on the power play, so he’s played well for us. With Ryan [Johnson] coming back we have some decisions to make with our personnel."

I doubt anyone (and hope no one) will claim him off the waiver wire...but you never know.

I had a funny thought today about the Tomas Kaberle situation in Toronto. Kaberle has stated that he will waive his no trade clause if management wants to move him. The first thing that comes to my mind is that Brian Burke is at the helm in T.O. Would he want to swing a deal with Mike Gillis, trading Kaberle for Ohlund? You know Ohlund is Burke's kind of player.
Would you work that deal if you were Gillis?
After spnding some time picking my nose and shovelling snow today I thought to myself: "No way." Kaberle can put up the points and run a power play better than most. But he is a defensive liability and has no physical presence. I'd rather keep Ohlund for a potential playoff run and risk letting him go for nothing in the summer.

Interesting column from Darren Dreger yesterday stating that the Lightning had offered Lecavalier and Paul Ranger to the Canucks for Roberto Luongo a couple years back. Check out that column here. Personally I think Nonis did the right thing.