The panel gets into all the Lecavalier to Montreal BS. It's the big topic lately. But the Lightning are only 8 points from the final playoff spot. They have won 6 of their last 8. I don't see him jumping ship anytime soon, unless Tampa tanks.

Great Ovechkin profile. Alex is saying that he, Backstrom and other Caps players will be sporting a freaky haircut during the playoffs this year but wouldn't elaborate.

Wow, there is a pipe organ being played at center ice right now. The singer has Britney Spears talent.

Luongo is the first All Star to skate onto the ice. A big thrill for him this experience is.

I think JS Giguere and even Sheldon Sourray have had the biggest ovations so far during the introductions. Mark Streit got a rousing ovation as well. But listen to that cheer for Lecavalier! Holy smokes. These guys read the papers too much. The ovation goes on for over 20 seconds.
Fans are loving Ovechkin.
Kaberle gets the boo's. He's the first to get that treatment.
The french love their own, huh? Martin St. Louis gets a great cheer.
Tim Thomas, Marc Savard and Zdeno Chara get boo'd, naturally.
Komisarek, Markov, Kovalev and Price get the home cheers.

Good to see Mason Raymond, who is a participating in the Young Stars game, get a chance to skate with the older players. This is the first time this has been able to happen.
1 lap around the ice. 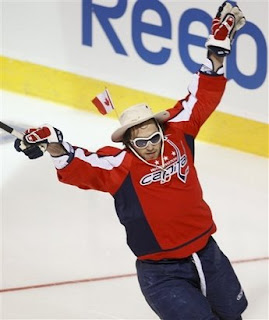 This is the one we've been talking about. Let's see what kind of freaky shit these guys can pull off. Fans will do the voting on this one.
So the goalies are punks who are told to basically stay out of the way of the incoming forward. Fair enough. This is all about the forwards anyways.

Patrick Kane: Used the butt of his stick to try score. Players get multiple chances.
His last try was sweet.
My score: 6

Ryan Getzlaf: Nice! He pulled off the lacrosse move! But mostly failed at the others.
My score: 7.5

Alex Kovalev: He just banked the puck off his head on the way in! He showed some original stuff indeed.
My score: 8

Steve Stamkos: More energy from Stamkos than the others. So much for the goalie getting out of the way....
My score: 8

Ovechkin: haha. Woa. Hahaha! Props! A fishing hat with sunglasses and a Canadian flag hanging out of it. Malkin wiped his glasses clean and squirted some Gatorade into his mouth before Ovie started. Then he uses 2 sticks at the same time. On the way in he threw one stick away and had to bang the puck past the no named goalie.

So, between Ovechkin and St. Louis. I think St. Louis bagged 2 great plays....so I'll pick him as the winner.

That was a good time. There's a lot of pressure on these guys to complete their moves. Not many were pulled off successfully. But it was more fun to watch than last year's event.

Carey Price and Pekka Rinne steal the show. Mason Raymond is everywhere as usual but has zero points to show for it. The players are playing at half-pace.
3-1 Rookies after 1.

The pace is a little faster. Mason Raymond bagged one after a pretty 3-way passing play and then played for 2 extra consecutive minutes.
For the record: Blake Wheeler is sick. Just sick.
More goals in this period. 7-4 Rookies so far.

Devon Setoguchi scores the goal of the game in this frame. What hands. I remember watching him play for the Prince George Cougars 2 years ago. There was no one on the ice that even came close to having his talent.
9-5 Rookies win.
Best players of the game: 1. Blake Wheeler (3 goals) and 2. Pekka Rinne.

-I would have watched the Crosby interviews before the next event but I was too busy watching paint dry.


Ovechkin won the breakaway challenge as voted by the fans. Popularity contest. Ovechkin voted for Stamkos.

Souray likes a sticky shaft. That's what he said... 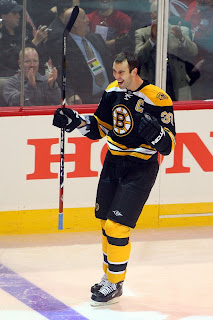 If you score you stay if you miss you're gone!

Toews: off the post (Backstrom)
Doan: scores. snap shot just over the glove (Lundqvist)
Parise: off the post.
Dustin Brown: tries a one-hander and misses
Weber: almost but no.
Robidas: hit the post. adiose
Niedermayer: through the legs and sneaks in.
Markov: stopped by King Henrik
Sourray: snap shot goal over the blocker
Chara: scores.
Savard: nice move and a goal.
Tkachuk: save
Marleau: scores along the ice
Carter: save by Henrik
Heatley: glove save
Nash: shoots and misses high
Kovalchuk: stopped by Backstrom
Lecavalier: stopped. great save by Lundqvist
Vanek: scores on Giguere (goalie switch)
Eric Staal: stopped by Tim Thomas
Hejduk: oh wow, nice backhander. Best goal so far.
Streit: stopped by Thomas and then crashes into that thingy
Kaberle: stopped by Jiggy
Campbell: save by Thomas. Timmy is gold.
Boyle: stopped by Giguere
Boumeester: scores off the post and in.
Komisarek: save by Giguere
Modano: scores on Thomas with a snap shot
Thornton: missed the net
Getzlaf: nice goal on Thomas. made it look easy
Iginla: stopped by JSG
Malkin: stopped by a Hasek-like Thomas
St. Louis: tries to go 5-hole and is stopped
Ovechkin: stopped by Thomas. OV almost loast the puck there.
Kane: missed on the backhand
Kovalev: scores! What a shot.

Doan: scores top shelf
Niedermayer: scores along the ice
Sourray: stopped.
Chara: gets fancy and is stopped by teammate Thomas
Savard: nice goal!
Marleau: scores. made Lundqvist go right
Vanek: stopped by Giguere
Hejduk: oh wow. scores
Boumeester: stopped
Modano: backhander and stopped
Getzlaf: scores along the ice on his buddy Giguere
Kovalev: what a damned save by Thomas as he does the splits

Doan: nice save by Giguere
Savard: stopped by King Henrik
Hejduk: easy save by Backstrom, who didn't even go down

Doan: 100 moves and scores along the ice
Savard: Scores on Thomas! Conspiracy!
Hejduk is stopped by Backstrom.

This whole event was cool. That was a fun time.