We should be able to beat a slumping Senators team, right?

Share All sharing options for: We should be able to beat a slumping Senators team, right?

The Senators have lost the first 2 games of their season-high 8-game road trip, a 6-3 loss to Calgary last night and a 6-4 loss to Flyers on the 23rd. Ottawa has not won a game on the road in 11 games now (0-9-2). However the Canucks have lost 3 of their last 4 games and are taking a lot of penalties in the process.
-Ottawa is 29th overall in goals per game. The Canucks are 13th.
-The Canucks have allowed fewer goals per game than the Sens.
-Ottawa holds a slight edge in power play efficiency.
-both teams have the same penalty kill percentage.
-both teams are utilizing goalies that are not considered starting netminders. Both goalies could be lit up at any time. How ironic that the last time the Senators came to GM place was December 9, 2005 and lost to the Canucks 3-2. Our goalie back then? Alex Auld. (Canucks.com) Now let's see what kind of effort Auld puts up tonight against us. It was only a couple of years ago when we dumped Auld, Bertuzzi and Bryan Allen to Florida to get Luongo and Krajicek.

The Senators sit 10 points out of a playoff spot in the Eastern Conference. The team is floundering. The Canucks sit in 5th in the West but the Wild West is insanely close in some areas, as you can see below. 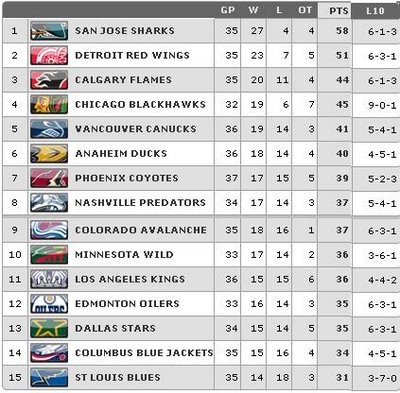 Yes, we have Sundin and Luongo arriving on white horses just over the horizon, but this injury-riddled Canucks team needs to look at RIGHT NOW and start winning with what they've got. If the Canucks want to roll the dice by taking too many penalties against the Senators they are going to pay for it. It's no secret that you have to shoot high on the shorter Sanford to beat him. The Sens have some guys who can do that no problem.
And just to point fingers at one player directly: we are not paying Pavol Demitra $4 million so he can slump like this repeatedly. It's great seeing him staying healthy, but he's got to get rolling offensively.

This Canucks squad is not doing much to convince me that they are going to win any games until Luongo or Sundin enter the lineup. That's unfortunate. I watched a couple of Devils games this weekend and they sure get the job done without Brodeur. Of course, Scott Clemmenson is better than Sanford I suppose.
As for tonight's game: As Gimli said in The Two Towers: "Let's hope they last the night."

Canucks.com's Live Blog is happening again. Everyone with a pulse and a clean mouth is invited. I will be joining the Mod Squad on that board tonight. 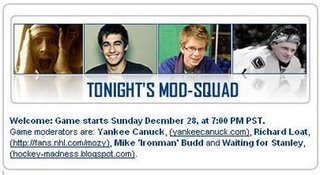