Sundin decision could come by December 15 / Nonis to Leafs

Share All sharing options for: Sundin decision could come by December 15 / Nonis to Leafs

It appears a Sundin decision may come soon, according to Sportsnet.

"We are driving towards making a decision by Dec. 15," J.P. Barry told the Vancouver Sun. "So right now we are trying to narrow the teams down. I have to ask some questions. There have been so many teams that have contacted us late so I need to go through the process and make sure I give Mats all the information."

I am not believing anything JP Barry says until the decision actually happens. This hoopla has gone on long enough. Like one commentor said at Sportsnet: "im still waiting to hear what his aug 1st deadline answer was"

That being said, I sure as hell hope Mats signs with the Canucks. Talk about a quick power play fix! Even seeing Sundin reunited with Wellwood would be a thrill for me personally. They had some good chemistry in Toronto a few years back.
Mike Gillis believes a Sundin decision may come soon:

Gillis told the TEAM 1040 in Vancouver that he is meeting with Sundin and his agent J.P. Barry over the next couple of days to make a final push for the Swede's services.

Gillis believes that Sundin will make a final decision within the next 10 days and remains confident that the Canucks are still in the running.

"Everything from our perspective has been positive with him from day one," Gillis told the TEAM. "He explained in detail how he felt about the situation he was in and I completely appreciate it. I've represented players who have been in similar situations and I understand and appreciate it. From where our team is today, I think he'd be the perfect fit for our group. He brings something to the table that would enhance our offense and enhance the leadership stuff that we are so focused on. Yeah, we're hoping that he'll come our way."


I am willing to bet that many Canucks fans are finding the new Burke / Nonis combo in Toronto kind of surreal. Does the picture below not anger you somewhat? They are playing for the enemy!
I am still trying to get used to the concept, but think this is a great combo for the Leafs. 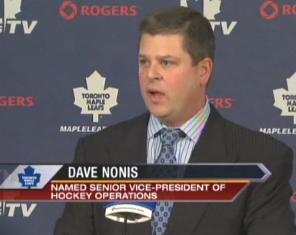