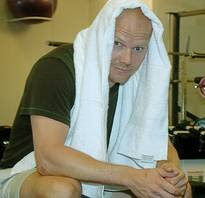 A source has told Hockeycentral that he will narrow the list of potential teams down to two or three this week.

Once the list is compiled, another round of meetings with management from those clubs is likely to follow.

Sundin is expected to make a decision on a team by December 25 at the latest, and would join the club around December 28.

The reason for the delay is the NHL roster freeze between December 19 and 27, which prevents players from being waived, traded or loaned. The club that would acquire Sundin would likely need to move a player to create salary cap space.

We shall see. I cannot wait for this debacle to be over with.
Last week his agent JP Barry was pushing for December 15th. That was obviously to beat the roster freeze. That could still be a possibility.
Yes, the Sundin frenzy is now taking off again. Most people are either angered or do not care (or both) anymore. I do. I have been a big Sundin fan for a long time now.
Hockeyexpressen has a Sundin story up as well, where his Swedish agent Claes Elefalk (who was with Sundin in Los Angeles) says that he has never seen Mats Sundin in better shape.
So with both agents saying these things, it looks like a decision will finally be made this month.
I gotta say, he's gonna look great playing with the Sedins! Ha!