Share All sharing options for: Sanford to play against the Wings tonight / Linden banner sneak peak

Beyond all of that great political news today that Canada's Governor General has agreed with Stephen Harper's did to suspend parliament (which I am 100% in favor of-damn the coalition) lies more important news: Curtis Sanford will play against the Wings tonight!

"It feels good, there’s just a little fatigue in the muscle because it has been stressed so much," Sanford said. "It’s just one of those things you deal with throughout the season and I’m ready to go.

"There’s still some tightness, but the good thing is the warmer it gets the better it has felt on the ice."

No offence to Cory Schneider, but I believe this does give us a better shot at winning. Sanford looked solid in the Columbus game before leaving due to back pain. Schneider had moments of brilliance but also showed signs of being a rookie NHL netminder.

Are the Wings going to gain some form of revenge from our OT victory over them last Monday? Detroit has been anything but stellar since that beautiful night. They lost the next game 3-1 to Montreal, then beat the Blue Jackets 5-3, lost 4-1 to the mighty Bruins, and then beat Anaheim 2-1 on December 1.

The Canucks need no explanation except to say they have lost 3 in a row since that victory over the Wings. (Do I pick good games to see live or what?) They need to score more goals to support their goaltenders, and they really need to play disciplined against Detroit. Sound like a broken record?

Canucks.com's Fan Zone will have a live blog of tonight's game and tomorrow's game against the Wild. Follow the link and hang out there. Should be a great time.

Darcy Hordichuk (cracked bone in foot) is questionable for tonight.
Tomas Holmstrom has missed 7 games with back spasms and may not play tonight (thank god). Must be from all those whacks goalies give him for standing in their crease. Can't say I blame them. I wouldn't want to stare at Holmstrom's ass all night either.

If I was a betting man, I would put money on Detroit winning tonight mostly because Luongo isn't playing and the revenge factor. But don't count out the Nucks in this one. They play Detroit hard most of the time.
We need Demitra back with the Twins though. That experiment was shot down much too quickly by Vigneault in my opinion. It's what I'd call a "knee-jerk" reaction. Put him back on the top line, AV!


I believe Alanah at Kukla's has found a sneak peak picture of Trevor Linden's banner, as seen below. Cool stuff. 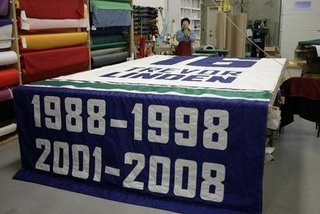