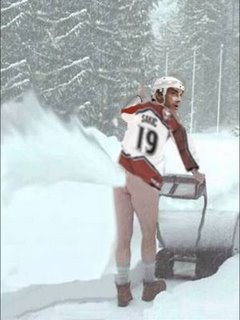 What a bizarre sequence of events that have happened to Joe Sakic recently. He was already out of commission with a herniated disc in his back, and now he'll miss 3 months after injuring his hand in a snow blower accident. Sakic has had surgery on his 3 broken fingers and damaged tendons as a result of the accident. My question is: "How in the blue hell did he injure himself snow blowing?"
For one, he didn't run his had over with it. Maybe he was repairing it. Aha! Even more dumb:

Sakic is actually fortunate that the injury was not worse. Reportedly the future Hall of Famer was attempting to dislodge some wet snow from around the blades. While the blower was off, when the snow was cleared the torque from the blades jammed his hand, says the article in TSN.


Secondly, it seems strange that he is using a snow blower when he has back problems. If I was a boss and this guy was off on WCB using that machine I would be suspicious. But that is only speculation on my part.
My other thought is a conspiracy theory....
Sakic goes off on long term disabilty and the Avalanche have enough room to sign Mats Sundin. How do you like that one? Then Joe can come back just before the playoffs. Who knows. Just throwing that BS out there.
How did I come up with that image? Ah, I typed in "snow blower accidents" in Google Images and that image was quite dominant in the results.
This whole situation with Ryan Miller accusing a referee using profanity is lame. What is he thinking? The MSM is corelating it to the Avery situation but that is just pathetic. Unless Miller is a serious Christian and is offended by such language and it perhaps violates his beliefs, then SHUT THE HELL UP!
The Yankee Canucks has a great piece up today about the 3 big Canucks hits on the Predators last night. Here's my opinion: 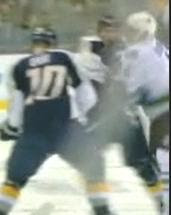 1. Rob Davison's hit was a beauty and completely legal.
2. Alex Burrows left his feet to hit JP Dumont. That constitutes a penalty. But as far as the head shot goes...I'm not buying that really. I didn't see him stick his elbow out like Randy Savage would. The impact to the head was coincidental. If you look at the image to the left, you can see that Burrows' hand or wrist area makes contact with Dumont's yap. But yeah, Burrows did jump.
3. I really don't think Kesler meant to board Shea Weber. People are so quick to judge a lot of these people and say the player should have let up. Many times THERE IS NO TIME to let up. The incident happens over the coarse of 1 or 2 seconds. Nobody's brain can rationalize anything in that time frame. You go for the hit. I will say that Weber changed his course of direction just before the hit, making himself prone to get boarded. And that kind of thing is what should be eliminated from the game first. Are these players psycho or what?? Take the bloody hit already!